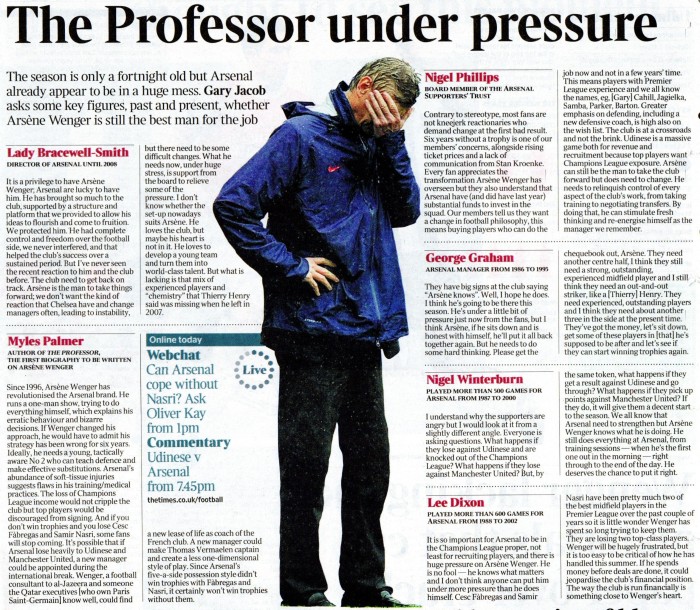 Well, in this week of super super big games, one down and one to go. The Times had this interesting piece on the day of the Udinese game, when the pressure was on Arsène as never before – despite a 100% record in CL qualifiers and a 1-0 advantage from the home leg.

So The Times got some ‘experts’ in to give us their views on the Arsenal situation that has consumed the media so much in recent days. I say experts – what do they know that we, who live and breathe the club, don’t?

Expert number one is Lady Nina Bracewell-Smith, former Board member, who recently became £100m richer with the sale of her husband’s family’s shares. All right for some.

“It is a privilege to have Arsène Wenger, Arsenal are lucky to have him. He has brought so much to the club, supported by a structure and platform that we provided to allow his ideas to flourish and come to fruition.”

If it was 2005 I’d be agreeing with every word. I’d even let her get away with taking credit. However, she only joined the Board in 2005, so to be honest, although I agree with her words, I think she’s laying it on a bit thick.

“We protected him. He had complete control and freedom over the football side, we never interfered, and that helped the club’s success over a sustained period.”

Yeah, well that worked for a while. Seems slightly less successful now.

“But I’ve never seen the recent reaction to him and the club before.”

Because you weren’t around it 30 years ago.

“I don’t know whether the set-up nowadays suits Arsène.”

Isn’t this the same set up that produced success over a sustained period?

To be fair Lady N does also talk sense about not wanting to change the manager on a whim like Chelsea, the need for experienced heads in with the youth, and the Board needing to take pressure off AW.

Expertise level: taking too much credit, but 6/10.

“Arsène has revolutionised the Arsenal brand. He runs a one-man show, trying to do everything himself, which explains his erratic behaviour and bizarre decisions.”

All true. He goes on to say that changing the approach now would be admitting he was wrong, he needs a new No 2, more defensive coaching, the injury list suggests flaws in training – all good stuff.

But: “It’s possible that if Arsenal lose heavily to Udinese and Man Utd, a new manager could be appointed during the international break.”

Well we’ll never know now, having beaten the Italians, but that statement looks a very long way from reality. Is he suggesting Arsène would have been sacked or would have walked? Both highly implausible at this stage, if not completely bonkers. Certainly he would never be sacked this early in the season, absolutely no way. Who in their right mind would sack a manager just AFTER the transfer window ends? And he’s never walked out of a contract, and would if anything probably be more desperate to prove his boys could still do it.

Next up, Nigel Phillips of the AST. I know Nigel well, as I’m also on the AST Board, and of course he is a fan like the rest of us, with the same emotional attachment.

“Contrary to stereotype, most fans are not kneejerk reactionaries who demand change at the first bad result. Six years without a trophy is one of our members’ concerns, alongside rising ticket prices and lack of communication from Stan Kroenke.” Yep.

He goes on to say that fans want to see some spending of the money we know is there, on players with Premier League experience, and a new defensive coach brought in. He agrees with Nina that Arsène needs to change and relinquish some control to become again the successful (as in trophy-winning) manager we ALL loved.

Expertise level: considers subjects others haven’t thought of, so 8/10.

Fourth is George Graham. I respect George for what he did for Arsenal, but his thinking is stuck in an era that Arsène himself blew away forever. Some of his stuff here I can’t even make sense of. The bits I can – we need a new centre half, experienced midfielder and goalscorer, and there’s money to spend – well, we all know that. Nothing original here, standard rent-a-quote punditry.

“I understand why the supporters are angry but I would look at it from a slightly different angle.”

Okay, go on then.

What are you trying to say here Nige? This is just a list of hypothetical questions! It’s all a bit existential, can you get to the point.

“If they do it will give them a decent start to the season.”

“We all know that Arsenal need to strengthen, but Arsène knows what he’s doing.”

Does he? Cos this is really what we’re all asking, and most of us think he needs help. To be honest, I’m not learning much here.

Expertise level: as demonstrated, only 3/10.

“It is so important for Arsenal to be in the Champions League proper, not least for recruiting players, and there is huge pressure on Arsène Wenger.”

“Cesc Fabregas and Samir Nasri have been pretty much two of the best midfield players in the Premier League over the past couple of years” – I’m starting to yawn, Lee – “so it is little wonder Wenger has spent so long trying to keep them. They are losing two top-class players.” Zzzzzzzzz.

“Wenger will be hugely frustrated, but it is too easy to be critical of how he has handled this summer.”

“If he spends money before deals are done, it could jeopardise the club’s financial position. The way the club is run financially is something close to Wenger’s heart.”

Yeah, well it livened up slightly at the end, but he only has a point if you accept without question that Arsène should have taken up the whole summer trying to hang on to players who wanted to leave instead of getting them out and having time to bed in their replacements before the season started.

This scoring may look like a fix because my mate has won, but really what that proves is that all of us know more about what should be done than the so-called experts! Punditry is nothing but money for old rope. Even Wrighty and Merse are in on it, and neither of them is the sharpest tool in the box!