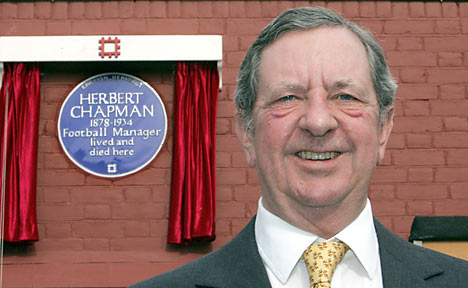 Peter Hill-Wood has left Arsenal, severing a connection that goes back to his grandfather joining the Board in 1922, before even the days of Herbert Chapman and the first great Arsenal side. The writing has been on the wall for several months, as he has not been in full health since last year. Even before that, many including me thought he would relinquish the role of Chairman last summer. Rumours abounded that Stan Kroenke would make his mark on the boardroom with a more permanent representation in London, possibly through his son. We should have known better. Arsenal remains a very conservative club, and the choice of existing Board member Sir Chips Keswick as new chairman is perhaps typical. It’s a surprise only because of Chips’ low profile over the eight years since he joined the Board.

PH-W’s profile has always been higher. He took over as Chairman in 1982, at a relatively young age, on the death of his father. Interviews with him during the 1980s and 1990s show a keen understanding of the football world and Arsenal’s position within it. He has presided over many of Arsenal’s greatest moments: the rise and fall of George Graham (including Anfield ’89) and the many successes of the Wenger years.

More recently his performances at the AGM and some ill-advised quotes to his mates at the Daily Star have somewhat tarnished his reputation. He’s had trouble sticking to the script at the AGM, and there is a good case to say that some of the meetings have been unlawful due to his poor handling of the resolutions. Never one to think too highly of the common fan on the terraces, this culminated in last year’s rather sarcastic AGM comment: ‘Thank you for your interest in our affairs.’ With hindsight he should perhaps have stood down a few years earlier, though his role has been purely ceremonial since the KSE takeover anyway.

However, much as I think it was time Mr Hill-Wood stood aside, I don’t really agree with people attacking him for being only interested in money. Peter Hill-Wood was part of a culture that goes back a long way at Arsenal, where the club was expected to pay its way without a benefactor. That’s pretty much how it has always been, and the likes of Hill-Wood and Ken Friar were personally involved since the time that football clubs were valued in total in six figures, there was no such thing as a television contract and players were paid a maximum of £20 a week. Let’s not forget it was only three decades ago that Hill-Wood welcomed David Dein’s £292,000 investment for 16.6 per cent of Arsenal with the words “It’s dead money”. He never expected the club to be worth £1 billion in his lifetime, that’s for sure.

He was reportedly miffed that Dein made such a large profit from shares PH-W later sold him, and it’s unfortunate that he wanted to profit himself by selling his last remaining shares to Stan Kroenke for around £5m. I’m disappointed he broke the family tradition and took that profit: what a gesture it would have been to forego a couple of million pounds he didn’t need and place some shares in trust for the fans instead of taking Kroenke’s dollars. It would also have shown up the greed of the other former Board members, who profited far more. So PH-W made some profit from Arsenal, but that can hardly have been his original plan when he became a Board member 51 years ago.

Here are links to other PH-W related posts:

Message to fans after George Graham is sacked

Parody column for The Gooner