Sovsport magazine asked me for my opinions on Andrey Arshavin and his time in England for their latest issue and a feature on Russians in the Premier League. They also asked a couple of Guardian journalists for their opinions on former Everton midfielder Diniyar Bilyaletdinov and former Spud Roman Pavlyuchenko, both of whom have, like Arshavin, just returned to Russia. I can’t confirm whether the Guardian journalists’ opinions are littered with typos.

Fulham’s new Russian goalscoring sensation Pavel Pogrebnyak is also featured, though as far as I can make out, it’s only his picture on this page.

To my eternal shame, I still speak no Russian whatsoever, so I’m taking the translation of my words on trust. Here are Sovsport’s questions and my answers:

1. So Arshavin’s gone. What’s the reaction in the team, among fans? Nobody’s noticed it, or everybody’s happy the club got rid of him or maybe somebody regrets he’s not in the team? Results got better as I understand?

There was a mixed reaction to Arshavin’s departure. The English transfer window ended earlier than the Russian one, so the general feeling was that he was not playing well so he could go as long as we got someone else in – and there were rumours of a big signing such as Hazard or Goetze. Then the English transfer window ended so there was no chance of getting a replacement, but Arshavin left anyway, which meant some criticism for Arsene Wenger. But as you say, results at least in the Premier League have improved, so generally it has been accepted.

2. Has Wenger ever admitted Arshavin’s signing was a mistake?

I don’t think Wenger has ever admitted that anything he’s done was a mistake! Some people think that Wenger didn’t really want to sign Arshavin and it was the decision of the Board, and that’s why he has never played him in his best position. I don’t think that’s true, I just think Wenger believes he can see where a player’s best position is and although he has been right many times, maybe with Arshavin he got it wrong.

3. Who’s playing oh his position right now? Could there be a chance that he would have played more now than in the last months?

Tomas Rosicky has been getting a lot more games recently and has been playing probably the best we have seen him in an Arsenal shirt, so that has helped fill the gap. Yossi Benayoun has had some criticism, but has also filled in sometimes where Arshavin might have been. But the player Arsenal fans are most excited about is Alex Oxlade-Chamberlain, who was bought last summer but has only recently been playing regularly because Wenger thought he was not ready.
Actually in one of Arshavin’s last games, Oxlade-Chamberlain was substituted and Arshavin was brought on in his place. This decision was booed by the crowd and Arsene Wenger got a lot of criticism, as the Ox had been Arsenal’s best player, though he may have been getting tired – this is what Wenger claimed, anyway. Either way, it did not make either Arshavin or Wenger more popular.
But Arshavin did set up Thierry Henry’s last minute winning goal against Sunderland in Henry’s last Premier League game, and there are few players who could be that accurate with a cross. So he got some good feeling and appreciation back from the fans for that before he went.
Would he have got more games? I don’t think so. He has not been first choice this season and it is difficult to see that changing, especially as Arsenal are out of all the cup competitions now, so there is less need to rotate the squad.

Arshavin will be remembered in London as a player who never showed us what he can really achieve. That is what is disappointing for us. For most Arsenal fans he did enough that we don’t consider him a failure, and there are other players at Arsenal who we would rather had gone instead. Of course his contract with Arsenal does not end until 2013, so there is a chance he will be back next season, but realistically we don’t think that’s likely. We wish him luck. He started brilliantly for Arsenal and he is an interesting man and a great character – you only have to look at his website and twitter feed to see that. We don’t understand what went wrong really. I don’t think he does either.

As for Pogrebnyak, well all I can say is he could not have had a better start to his career in England. I have not seen much of him, just some highlights of his goals, but he looks a big powerful player who should be able to adapt to the physical nature of the Premier League very well. He perhaps has an advantage at the moment because he has had a winter break that we don’t have in the English season, so he will have had more rest than the other players. At first sight he seems to have a slightly clumsy style, but has still put the ball in the net five times in his first three games, though I must say that Fulham have not played against any of the leading clubs since his arrival. So we’ll see, but a good start. Of course Arshavin had a great start too, so nothing is guaranteed! 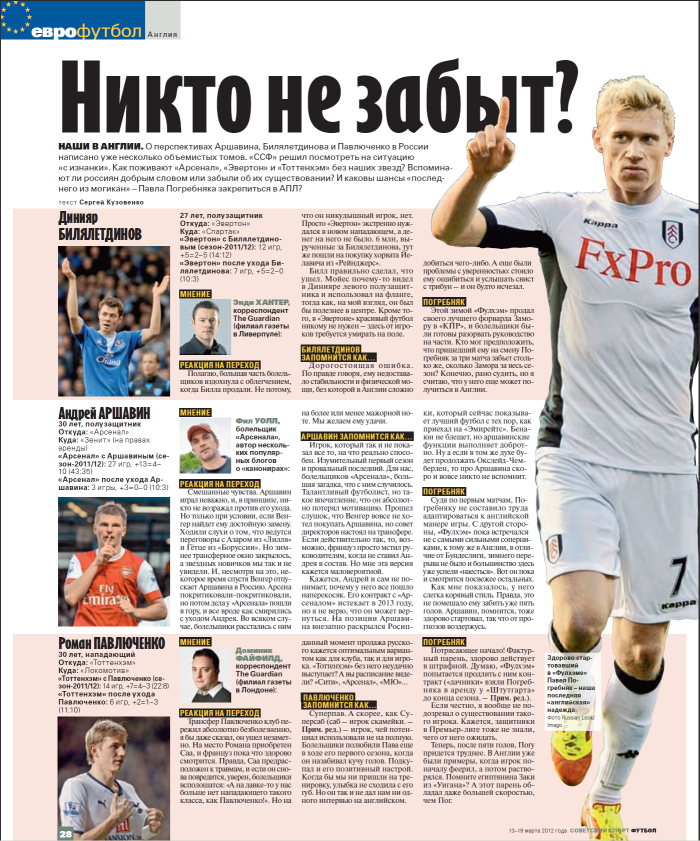 Maybe I should get a new picture of myself wearing a collar, standing sideways and looking serious, like a Guardian journalist.

You may disagree with my opinions on Arshavin. Feel free to write to the editor of Sovsport if you do.

The original Sovsport piece is here.

2 thoughts on “Arshavin: Success or Failure?”