Interesting little bit of side info from the Glasgow Rangers debt crisis: they currently owe Arsenal £438,982.63. This is detailed in the Administrator’s report dated 20 June, and apparently relating to the period up to 14 June. Arsenal are alphabetically first in a very long list of debtors that includes over £94 million to HM Revenue & Customs, for a grand total of £124,219,412.37.

The only logical reason I can think of for Rangers owing Arsenal money is to pay loanee Kyle Bartley, who was at Rangers from 4 August 2011, the day after he signed a new three-year contract with Arsenal. 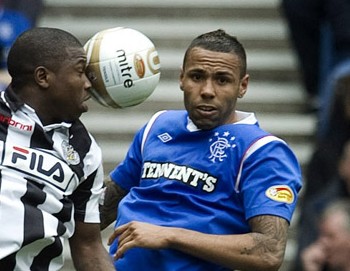 But maybe Rangers were paying for the first part of the season and stopped only when they went into administration – and you’d think that someone at Arsenal would have done something about it if they sent a player on loan and got nothing in return for the first six months. Wouldn’t you? I mean, if it was you, you’d do something, right? And as I keep getting told whenever I criticise anyone employed by Arsenal, they’re professionals, you know. So that would only be non-payment from 14 February to 7 April, which is less than 8 weeks, or 18 weeks to 14 June. I can’t believe any club, never mind a club deep in debt, would ever agree to pay for time after the season finished, so let’s just use 7 April. £439k divided by 8 is £54,875 a week – which can’t possibly be right. For one thing Nicolas Bendtner would never stand for some upstart getting two grand a week more than him. So I can only assume that either this is for the whole season, which would give the 12 and a half grand a week figure, or there is some other fee involved (where to me it would seem daft that Arsenal wouldn’t insist on that up front, but still).

Of course I’m also assuming that Rangers are paying all of Bartley’s wages. Arsenal wouldn’t loan a reserve player and subsidise his wages as well, would they? That would be phenomenally poor business. No, they’re professionals, remember. I’ll assume they’re not that daft.

Bartley’s Arsenal career so far has consisted of one appearance in the Champions League, and a substitute appearance in the Emirates Cup last year when he scored an own goal. So what is the going rate at Arsenal for a 21-year old with one full competitive appearance in a meaningless match? £12.5k a week is believable, if not great business. If it’s much more than that, Ivan Gazidis has got a hell of a lot to do on sorting that wage bill.

19 thoughts on “Arsenal Wages: Still Work To Be Done, Ivan?”