I surveyed 656 Arsenal fans around the world to ask what their preferred ownership model is for the club. Actually I asked quite a few thousand, but only 656 could be bothered to read all the options and vote. No matter. I am happy it is a representative sample, because I kept an eye on the percentages once the number of responses passed about 250, and they really didn’t change very much.

All the figures are in the graphics below, but in summary neither current owner Kroenke nor would-be owner Usmanov are actually very popular. In an ideal world – which was the scenario I asked about – only 2.3% chose the current position (Kroenke as majority owner) as first choice, with 6.4% preferring Kroenke to own 100% of the club.

For Usmanov, 13.4% were seduced enough by the Uzbek’s promises, and no doubt the performance of other clubs recently under billionaire owners, and would like him as sole owner, while a further 3.5% would be most happy with a reversal of the real world situation: Usmanov with a majority and Kroenke as the other major shareholder.

However, these numbers pale next to the 56.4% who would most like to see fans with a majority of shares, split fairly evenly between the Barcelona model of 100% fan ownership and the Bundesliga model of fans with a minimum of 50% plus one share. In a way I find this quite heartening, even if unlikely to occur.

You can study all the figures below. I forced every respondent to answer all questions, or I think I’d have got a few thousand votes in the ‘Would you sack Wenger now? poll. That and Where are you from? were rather easier to answer than the ownership question. But for all questions the percentage after a couple of hundred votes stayed level, in the Wenger case very close to 10%. I’m fairly confident this gives an accurate reflection of fan attitudes to the manager. About 10% want him out now, but I’m sure there are others who would be happy to get rid of him at the end of the season.

Feel free to do your own analysis of the figures and draw conclusions! Comments welcome. 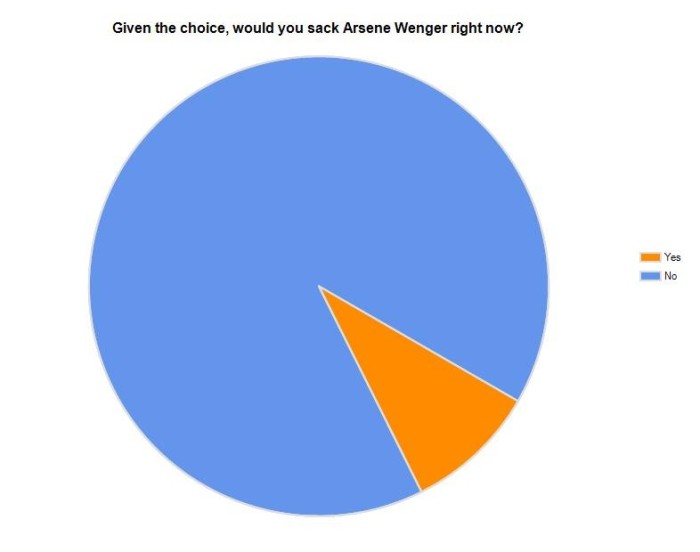 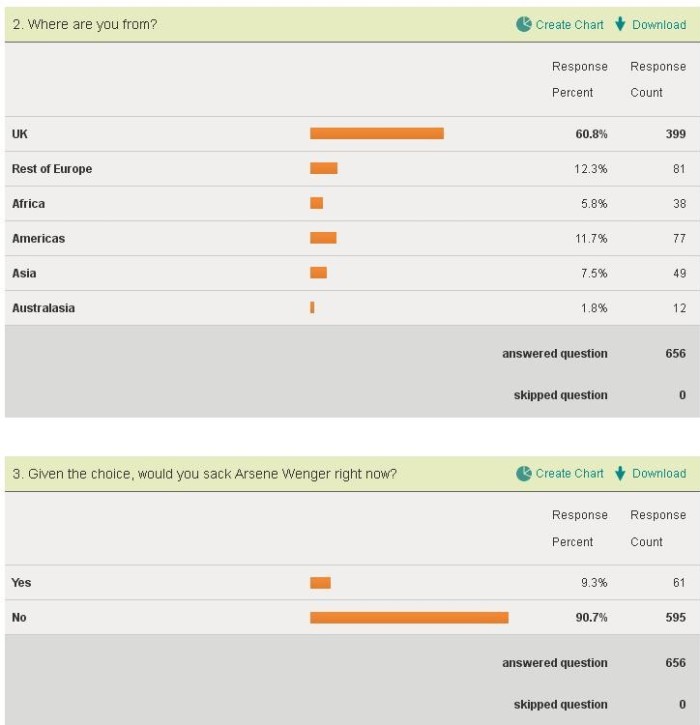