The other day someone left a comment on a blog post of mine asking why some of us call our stadium Ashburton Grove. What the hell is Ashburton Grove anyway? I thought rather than just post a one line response, I’d have a look a little further back.

Most long-time Gooners will know that Ashburton Grove was one of the roads that was built over as part of the new stadium development. But here’s the map of our corner of London at the moment, courtesy of Google. And it is literally a corner, as the stadium is hemmed in on two sides of a triangle by railway lines.

Google actually have the word ‘Emirates’ on their map before the word ‘Stadium’, but I don’t recognise that corporate nonsense (especially now that they’re not even going to be paying for it any more), so I’ve changed that to ‘Arsenal’. Much better. The old stadium no longer exists for Google, but for those unfamiliar with the area Highbury was diagonally north-east of the new ground, between Highbury Hill, Gillespie Road and Avenell Road. The map has a slightly odd position for Arsenal Station, as the only entrance is on Gillespie Road opposite Highbury Hill. They’ve marked the position of the platforms, which is not much use for anyone actually trying to find it.

So what did the Ashburton Grove area look like before Arsenal moved in? To start with, let’s go right back to 1885, the year before Arsenal was founded several miles away in Woolwich.

At that time Holloway and Highbury still had a lot of open spaces, but Ashburton Grove existed and appears to consist of rows of terraced houses. Given the amount of space still around the area I suspect Ashburton Grove was fairly new at that time. I’ve marked the position of the new stadium with a red dot. The future positions of Arsenal tube station and the Highbury ground are marked in green and blue respectively, and the yellow dot is the site of the Tollington Pub, beloved of many Gooners on matchdays and Akhil Vyas pretty much every day. Tollington was actually a settlement in the area around 1,000 years ago, so has a long history, of which there is more here, should you be interested. The other thing to note is that there was only one railway line at this time – the Ashburton Grove area was easily accessible from the Highbury side to the east.

Next is a map from Arsenal’s first great period, the 1930s.

As you can see, ‘The Arsenal Football Ground’ is proudly displayed. There’s not enough detail to make the ground layout particularly clear, but the mapmakers appear to have marked the East and West Stands in pink, with the rest of the area occupied by the pitch, Clock End and North Bank (Laundry End in those days) in green. This was long before the days of any seats at the ends, or course, and the map may have been drawn when the terraces were still just banks of earth without concrete steps or any covering (and covering applied only to the Laundry End until the 1990s). The London College of Divinity, from whom Arsenal bought the land for the ground, is immediately to the south. Arsenal station is once again marked in an odd place. Interestingly (to me), the blue boundary lines showing London postcodes indicate that the Ashburton Grove area is actually in N7 rather than Highbury’s N5, though the Post Office have let the club keep the N5 code since the move.

The other thing to note is that most of the area now occupied by the stadium and its surroundings is still largely blank. The second railway that comes from Moorgate up to Drayton Park and Finsbury Park is now there, and had been since 1904. The line south of Drayton Park station is (and always has been) in a tunnel, and emerges to join the surface lines at Finsbury Park. At Drayton Park the line is below surface level in a cutting.

I imagine that the site of Drayton Park station and the surface line from there to Finsbury Park was chosen precisely because it was empty. That ultimately did Arsenal a favour, because by cutting off a triangle of land between the lines it made it undesirable for housing or other social uses, given the difficulty of access. In the 1930s it was probably still wasteland of the kind that flanked many railways back in the days when the UK population was half its current size and there was no shortage of space. The fact there is a line marking off the white space seems to suggest that it was railway land, similar to some of the land near Finsbury Park. Queensland Road was a dead end, though there does appear to be a footpath under the railway at the end of it.

Moving on to 1995, and a map from the London A-Z of the time – an essential tool for cabbies, tourists and indeed all Londoners before the invention of the smartphone. 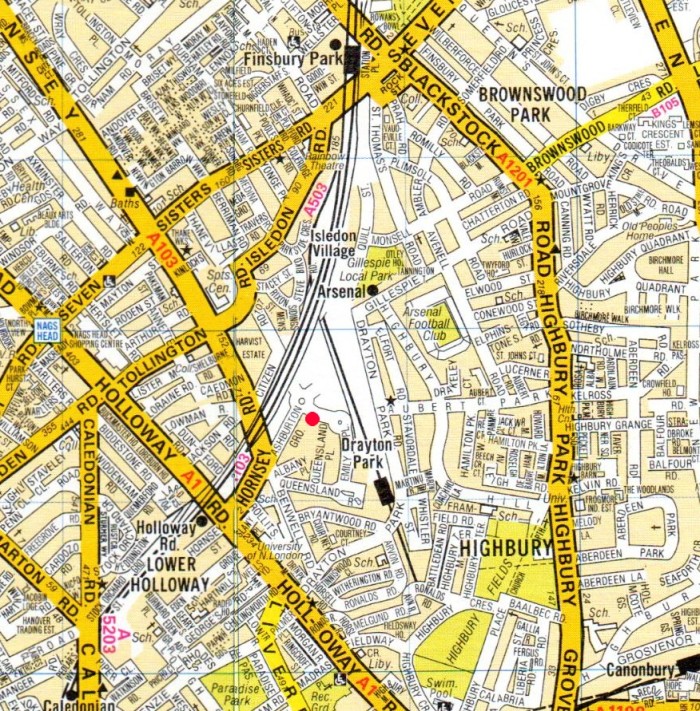 Highbury stadium is marked as Arsenal Football Club, with a reasonably accurate shape for the time. Arsenal tube station is for once marked where you would actually locate it, and the site of the new stadium is marked (by me) with a red dot. As you can see, the roads around Ashburton Grove have expanded a bit, though they tail off into nothingness. By this time I think houses on Ashburton Grove were long gone and had been replaced by light industrial units and municipal facilities (ie a dump). I remember walking along Drayton Park (road) and there being a huge fence all the way along, so you couldn’t even see the railway never mind what was on the other side. The away supporters’ coaches used to be parked there in convoy. It’s all much smarter now. Personally I never had a need to go into the Ashburton / Queensland Road area, so I can’t give first hand descriptions of what it all looked like before Arsenal brought the bulldozers in.

And so back up to date. This is the satellite picture on Google now.

Queensland Road still exists, as does Emily Place, though it’s shorter than it was. Queensland Place and Albany Road have disappeared under concrete along with Ashburton Grove, so I guess we could have called the new stadium after one of those two. However, at the time of building the club always referred to ‘the Ashburton Grove site’, so those of us who aren’t sold on the idea of calling it after an airline just took the name on. Ashburton Grove is certainly not the best stadium name in the world, but it’s better than taking virtually no money and still giving the name to a sponsor almost indefinitely. Well done Arsenal commercial department.

285 thoughts on “The History Of Ashburton Grove”