This is a piece from The Times yesterday, 6 December. I love it when commentators (in the journalistic sense) explain how Arsenal fans feel. You can barely find two of us to agree these days.

Anyway, the premise here is that Arsenal are actually doing fine – we’re not like other clubs with their needy trophy-chasing. Better to be admired than to actually win. And admired we are, you see, because Marco Reus, “the budding superstar of Borussia Dortmund”, is the latest in a long line of players to have said that he most enjoys watching Barcelona and Arsenal.

This, as the writer Rory Smith points out, is far more flattering to Arsenal than Barcelona, given that we have won naff all since Marco Reus was in short trousers. What he doesn’t point out is that it’s even more flattering given that we are not even playing attractive football this season. An Arsenal performance often has all the entertainment value of bingo. 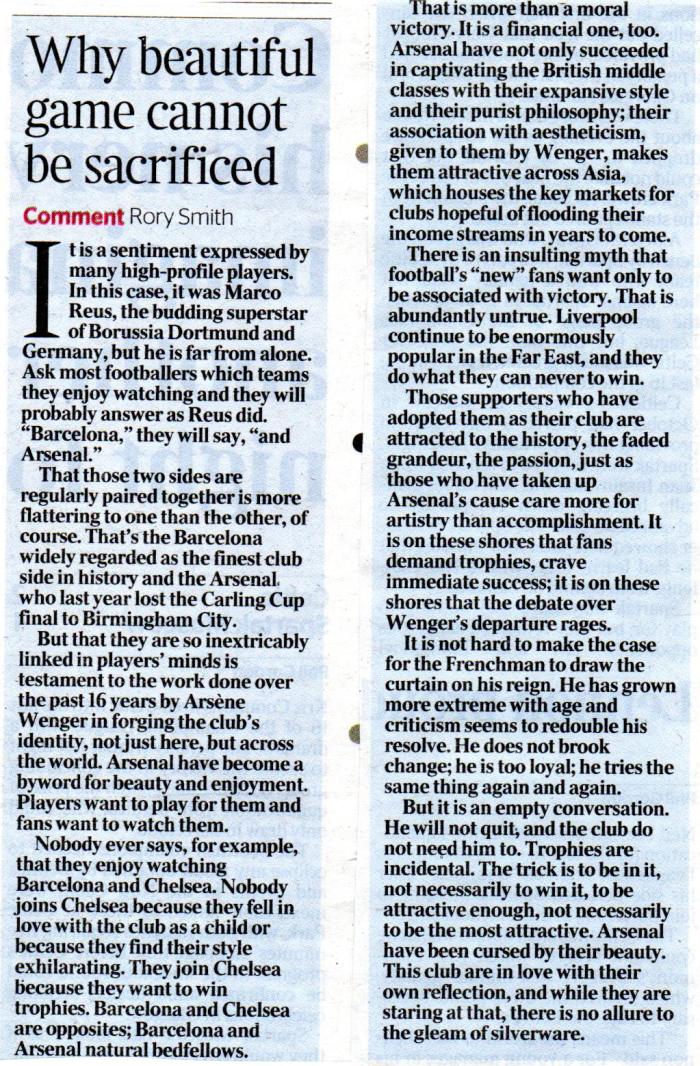 It may be true that no one ever says they like watching Chelsea and Barca, and that players don’t join Chelsea for their reputation, but just to win some trophies. And it may also be true that this is down to a legacy of 16 years of Arsene Wenger at the helm, but it’s not something I’m personally feeling much benefit from right now. I think Rory Smith underestimates the value of actually winning something. We Arsenal fans are not all middle-class JCLs who are happy to admire Arsenal’s aesthetic; sooner or later we want some silverware, because otherwise we get fed up with having our noses rubbed in other people’s success.

Oh – did I say our reputation is the legacy of 16 years of Arsene Wenger? Actually it’s not; it’s the legacy of about ten years of Arsene Wenger, followed by about six where we have lived almost solely on our reputation. Old habits die hard. It’s like the emperor’s new clothes. Everyone believes Arsenal play beautiful football. You don’t actually need to watch it these days, it’s obviously beautiful, everyone knows that. It reminds me of Aristotle writing that flies have four legs. This observation was repeated in natural history books for millenia. Aristotle says it, so it must be true. But you only have to look to see that it isn’t.

Even if it were true that Arsenal still played a Barca-like game, even beauty can become boring after a while if there’s nothing behind it, as Oscar Wilde probably said. Rory Smith tells us ‘Trophies are incidental’. Hmm. Not quite.

4 thoughts on “‘Trophies Are Incidental for Arsenal’ says The Times”