These are some extracts from a publication called League Football, ‘The official journal of The Football League’, that was given away stapled into various club programmes in the early 1970s. This particular edition was in the programme for Crystal Palace v Arsenal on October 21, 1972.

It’s an odd publication, with a mix of general articles about football and colour pictures of teams and players mixed in. There are two full page colour advertisements in this issue – both for cigarettes!

My favourite bit is the letters. We are in a golden age at the moment of populating the internet with all the amusing and idiotic stuff that previous generations have left us in print. Our children will never have the same pleasure, because every bit of crap will already be on the internet by the time they get to it. And letters to publications give a fantastic view of the attitudes from the time, usually much better than the articles. How can you not want to read a letter entitled ‘Weirdies are driving crowds away’?

A E Jennings of Beech Road, Farnborough, writes: “I note that a section of the press attribute the apparent fall in attendances to too much soccer on television. I cannot agree with this . . . To my mind one of the main reasons for the drop in gates is that there is too much horse racing on television. This is what keeps the soccer fan glued to the box on a Saturday afternoon”

Too much football on television? In 1972 there was about two hours of recorded highlights of league or FA Cup football on per week! Live games were England internationals and the Cup Final. All weekend matches kicked off at 3pm on Saturday though, and it is true that ITV in particular used to fill the Saturday schedule with non-stop horseracing for about two hours between two and four pm.

Mr Jennings also points out high ticket prices as a contributory factor to falling gates – an eternal problem – but his best thought is this:
“To some extent hooliganism, the stupid singing and scarf waving by younger spectators and the failure of managers to insist that players take the field looking like tidy, respectable athletes, contribute to the drop in gates. With regard to my last point, Don Revie should be congratulated because Leeds United not only play good football but their players look like footballers and not long haired ‘weirdies’.”

Brilliant. Are you listening Charlie George? George Best? Peter Marinello? And you fans, with your stupid singing! Can’t you be quiet for 90 minutes? And Leeds, of course, were the dirtiest team in the league, full of thugs who would kidney punch you the second the ref’s back was turned. Good football, my arse.

By the way, seats at Palace ranged in price from 60p to £1 at the time, and they were advertising tickets for their away match at West Ham for 40p-50p. The coach fare from Palace to West Ham was 45p.

Slightly more sensibly than Mr Jennings, there’s a piece by Everton manager Harry Catterick suggesting moving the season to be March to November, which would improve the notoriously bad playing surfaces of the time. Catterick also majors on the new phenomenon of TV evidence being used in appeals against referees decisions, which he doesn’t like – though to be fair it was the number of frivolous appeals that he hated most. 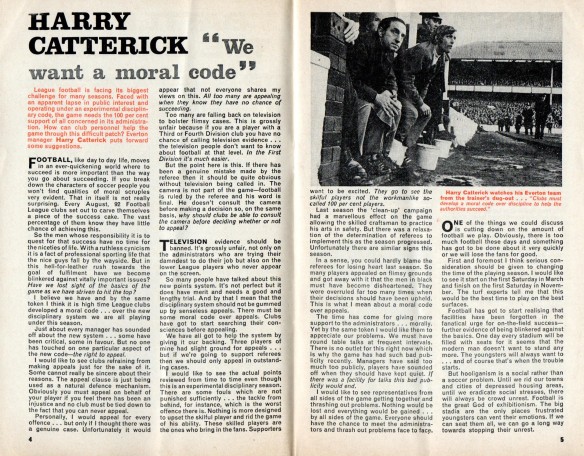 He is quite ahead of his time on one point:
“Football has got to start realising that facilities have been forgotten in the fanatical urge for on-the-field success . . . One day every stadium will be filled with seats, for it seems that the modern man doesn’t want to stand any more.”

Then there’s a piece about clubs having to change their badges and crests to stop unscrupulous ‘exploiters’ selling unauthorised souvenirs. The football souvenir business was still quite new in 1972, and clubs were just realising the money to be made if they kept control of it. Interesting that Arsenal, heavily criticised for changing the crest much more recently for exactly this reason, took a further 20-plus years to do anything. Perhaps they should just have changed it in ’72 and avoided all the later flak.

There’s a piece that starts with the prediction that an African team would win the World Cup by 1982 – not quite there on that one – which is followed by, apropos of nothing, the news that the Football Manager of The Month for August 1972 went to Bertie Mee of Arsenal. Bear in mind that this could hardly have been news, as it was October before this was published! 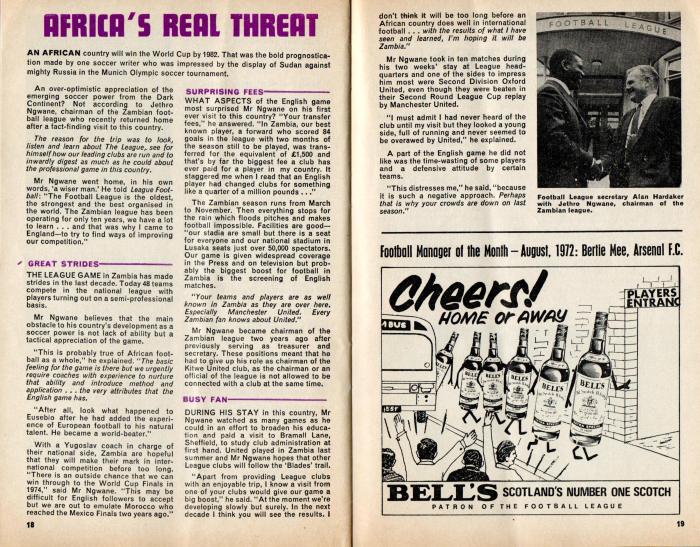