Well now, some more statistics for us to get our teeth into. Some Arsenal fans have long lamented the apparently never-ending injury list we seem to suffer. There is of course some bias in our opinion about how much we are affected by injuries compared to other clubs, as we notice what happens to our own players more than those elsewhere. On the other hand, any club would notice if a player has missed as much time through injury as the unfortunate Mr Diaby.

But are Arsenal’s injury problems really worse than those of other clubs? Is a string of long-term injuries no more than a random occurrence, and it’s just ‘our turn’ to suffer from it for a few years? Any day now we may find everyone is fully fit and stays that way, while Man Utd players are all living in the treatment room – possibly with incurable STDs spread around by a certain Liverpudlian’s poor hygiene and habits with dirty towels – I don’t know, I really couldn’t say and it would be unfair to speculate.

It’s very hard to be totally objective on injury lists, because even if you add up all the weeks that players have been out injured at different clubs, do you also have to judge the importance of the player to the club? (Are they a first choice? Not always easy to tell in these days of squad rotation.) And it would be nice to take a view on whether the injury was preventable or not – did it occur in training, in a match, or because the player is a dimwit who poked himself in the ear with a snooker cue on his afternoon off?

As usual, we need more data to make a judgement. Be that as it may, Bill Edgar in The Times had a go at ‘proving’ whether Arsenal have an inherent problem of what we might call institutionalised injuries by looking at players transferred in and out of Arsenal and their records with Arsenal compared to other clubs. 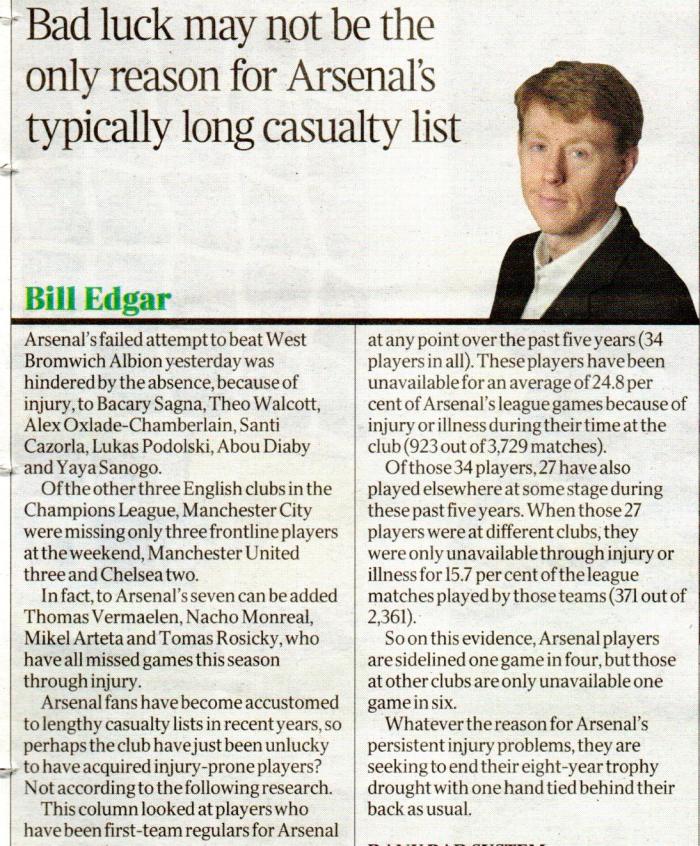 As you can see, his figures show that Arsenal players suffer less from injuries when they’re at other clubs than they do at Arsenal. At least they do in his sample. It’s not a huge difference, though, and no doubt the inclusion of figures for Van Persie, who has been in uncommonly rude health for the last 12 months, have affected it. Not to mention Cesc ‘ooh, me hamstrings’ Fabregas. I’d like to see a breakdown of the figures player by player, personally, as one or two may be skewing it considerably.

A few ex-Arsenal players have come out in recent seasons and said that training at Arsenal tends to be ‘softer’ than at other clubs, with full-blooded challenges banned. Does that make it more likely Arsenal players will be injured in matches because they’re not used to the rough stuff, or less likely because they’ve reduced the wear and tear on their bodies? I honestly have no idea. Then again, we do also seem to suffer from injuries picked up in training.

If there is something in the data and Arsenal do have more than their fair share of injuries, what does it mean? Does it mean:

What do you reckon?

Since posting this one reader has pointed me to his own work on the subject, which is in far more depth than I have been bothered to go into. He’s put links in the comments, but here they are to save you going looking:

Well worth a read.