Just a brief post as Alisher Usmanov and Farhad Moshiri’s jointly owned investment vehicle R&W Holdings have announced that they’ve taken their Arsenal shareholding over the symbolic 30 per cent mark today with the purchase of 6 shares.

There’s no update on Arsenal.com as yet, though these normally appear on a Friday, so if the paperwork is all done and dusted then we should see that tomorrow. I suspect, though, that given the timing of this to coincide with the AGM, R&W have decided to announce today and complete the paperwork later. The announcement was made through ISDX, and was necessary as it breaches a recognised threshold.

This takes the R&W total from 18,665 to 18,671 shares – 18,666 was needed for 30 per cent. This is the first share purchase notified by R&W since May. Purchases earlier this year that had kept R&W on 29-point-something were only announced through Arsenal.com updates, not on ISDX. 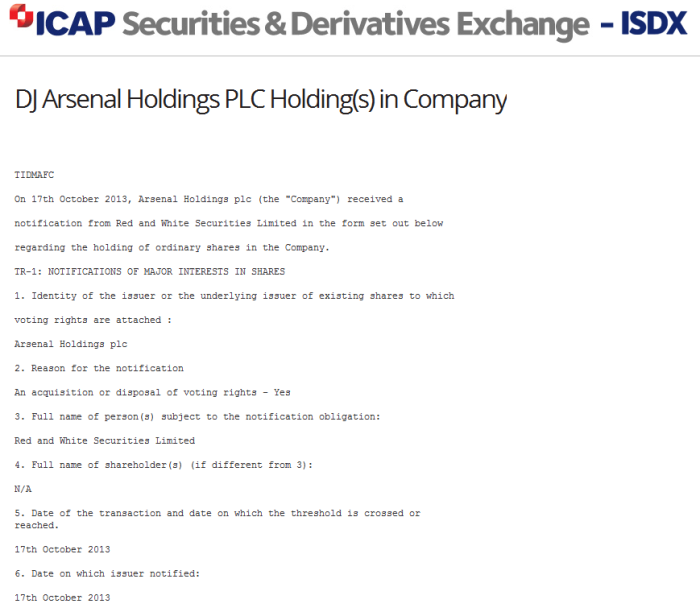 There have been no trades reported on the ISDX exchange since a single share on October 9, so it appears R&W have continued their habit of purchasing privately off market. This means there is no requirement for anyone to know the terms of the deal, though R&W have previously stated that they never buy at higher than £14,000 per share. The prevailing price recently has been around £15,000.

Stan Kroenke’s KSE own 66.83 per cent of Arsenal, a total of 41,583 shares. The remaining three per cent of shares are split between about 300 shareholders, the largest of whom has 120 shares, with the AST’s Fanshare scheme currently holding 104.

A quick reminder of what the share totals mean:

If you’re new here, I’ve done various Usmanov/share posts before, so if you search for ‘angryofislington Usmanov Q&A’ you’ll find all of them pretty easily.