Are we calling it Shirtgate or Sleevegate? I’m not sure. Either way, in the absence of any proper Arsenal news, the story of Flamini cutting the sleeves off his shirt for the recent Man Utd match has rolled on for a few days in a rather larger way than it would have if there were some proper football to talk about. By the way if you are thinking of doing a bit of betting on the upcoming match make sure to check out Coral Sports for their latest odds!

If you have escaped the news, it’s like this: Flamini didn’t want to wear the long-sleeved shirt allocated to him for the match, so he took a small pair of scissors to his yellow shirt and cut the sleeves off it. Or rather, hacked them off in an untidy fashion. 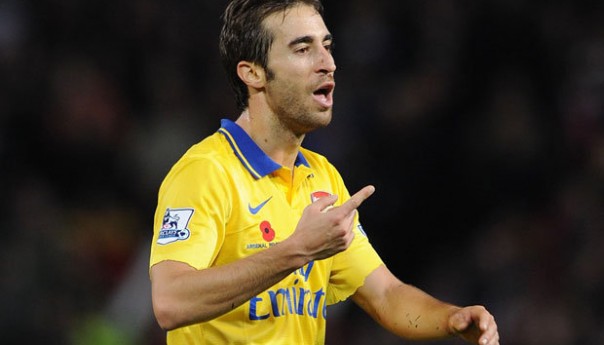 According to a ‘source’, long-serving kit man Vic Akers confronted the Flamster after the game, as apparently no one noticed until the second half was underway. Does this mean that he only did the scissor-job at half-time, or is everyone in the Arsenal dressing room particularly unobservant? I don’t know. And to be honest I don’t much care. Anyway, Flamini was said to be unrepentant, while Sagna was apparently the only player to actively side with Vic Akers, presumably meaning that the other players were too unobservant to even notice the row, or were suffering a bad case of couldn’t give a toss.

Some Arsenal fans are up in arms (geddit?) about the antics of the Fiery Frenchman™, as it is a long-standing tradition that the Arsenal captain chooses whether the whole team is to wear long sleeves or short sleeves, and the rest of them are supposed to comply. They can of course roll their sleeves up if they wish, an option surely open to Flamini, but one which he decided not to take. The only previous instance I’m aware of when the tradition was broken was when Eboue appeared in a short-sleeved shirt while everyone else wore long sleeves, though whether this was deliberate I’m not sure. I seem to recall that Frank McLintock used to roll his sleeves up when captaining Arsenal – perhaps he was being nice to his teammates by choosing long sleeves on cold days even though he didn’t need them himself. Or perhaps he just wanted to look as though he was prepared to graft – the expression ‘to roll your sleeves up’ was not invented for no reason. Why didn’t Flamini realise he’d have looked tougher and meaner with sleeves rolled up than with short sleeves?

Should we care about all this? I must say that while it’s nice to have traditions, this one doesn’t strike me as particularly important. Given that players roll their sleeves up anyway, it doesn’t make the team look smarter to all wear the same shirts, and there’s surely no other benefit.

How old is this tradition anyway? Quite old – it’s been in place since Spurs last won the League! Before 1961 only long-sleeved shirts were ever worn, so the matter never came up (I’m indebted to Andy Kelly for this fact). However, length of tradition isn’t necessarily a reason to keep something going if there’s no benefit. In any case, many of the things we like to celebrate as Arsenal traditions started much later than Arsenal started. The club did not come into existence fully-formed and complete with every facet we now know and love. The tradition of white sleeves took nearly 50 years to arrive. The club crest has been through more changes than the Chelsea Manager’s seat. The motto has changed. The traditional yellow and blue away kit started in the late 1960s. None of these things were always there, so they were all new once and only look traditional to us now. Don’t get me wrong, tradition has its place, but it’s not the be all and end all.

Personally I am more concerned that a player thinks he doesn’t have to follow rules. Flamini has been at Arsenal long enough to know that this is a rule that’s been in place for decades, so if short sleeves were so important to him, perhaps he shouldn’t have signed a contract. He gets paid by Arsenal, not the other way round, so Arsenal tell him what he can and can’t do. He’s not bigger than the club or the club’s rules, whatever they may be. If you’re a policeman you wear the uniform given to you; ditto the Navy. If you work on a construction site you wear a hard hat and boots. You don’t mess around with these things as you please. If you want variety, join the Village People and you can choose whatever uniform you want, but you still wear the whole thing without cutting it to bits.

It doesn’t seem very respectful to the club to start hacking the kit to pieces, and it seems slightly worse to do it to a shirt commemorating the dead of two world wars.

Maybe it’s time to put this tradition to bed and let the players wear whichever shirt they prefer. But hacking the sleeves off and looking a mess? That’s just daft and disrespectful.

5 thoughts on “Flamini Cuts His Sleeves Off: Take That, Arsenal Tradition”