Arsène has been coming out with some funny stuff lately. We had complete radio silence for two weeks after Welbeck was signed, then when he did speak he claimed we’d only signed the player because he (Arsène) was out of the country on the day. Very odd.

Then there were some contradictory comments on Cesc and then after the Spurs match the subject was corners: we’d had 15 and hadn’t scored. Arsène thought this was poor, and said so: “If you go anywhere in the world and have 15 corners against you, the ball goes into the net . . . On Monday we will be practising corners.”

Then before the Galatasaray game he said that actually they hadn’t had time to practise corners! Well don’t worry on that one Arsène – firstly Gala were ropier than a ship’s rigging so scoring proved no problem at all, but in any case I think Arsène’s corner stats are a bit off the mark. I recalled reading this in The Numbers Game, so looked it up in the book and here: on average in the Premier League a corner leads to a shot only one time in five, and of those shots only one in nine goes in. Which means that on average you need 45 corners to score a goal, which the authors reckon is about once every ten games.

So on the face of it having 15 corners and not scoring is hardly a surprise. There might be other things worth working on that would yield better results. However, it must also be said that if your corners always hit the first defender then that is poor, and practice would be in order. Similarly, if you have no variety in how you take them you can work on that. Given that Arsenal’s whole style of play revolves around keeping the ball, why not play more short corners anyway?

I’d also point out for the record that ‘corners leading to shots’ in this research meant a shot within three touches of the corner being taken, and I don’t know how many occurred on the fourth or fifth touch, which might well be argued as still ‘from the corner’. And also the sample studied was 134 matches from one season, which the authors clearly believe is a big enough sample, but it might not be.

However, the upshot is that they concluded that as corners lead to so few goals there is no link between numbers of corners won and goals scored or matches won. And of course with your central defenders in the opposition box and possibly not able to run all that fast, *cough* Per, then you’re vulnerable to conceding on the counter-attack, making the real value of a corner effectively nil. So consider leaving the defenders in your own half and playing it short, is the message.

Arsène also said, “That we didn’t have that many shots on target isn’t much of a concern.” Well I’m sorry Arsène, but I have to take issue with that one as well. There is a pretty good correlation between shots on target and goals, and an even better one between goals and winning. Teams with the most shots on target and the highest percentage of shots on target to total shots are the most successful teams. So Arsène really should be concerned about this.

Once again I don’t know what to make of Arsène’s pronouncements. I can’t believe he really thinks that the number of shots on target – effectively creating good chances – doesn’t have much bearing on the result. To be honest I’d be surprised if he wasn’t also aware of the average effectiveness of corners, given that Jose Mourinho has commented that only in England is winning a corner often cheered almost as loudly as a goal, and the prevalence in Europe was to focus more on keeping possession from corners years before anyone in England thought about varying the ‘hoof it into the box’ strategy.

However, what concerns me, particularly with the Chelsea match coming up, is whether Arsène really does take notice of the right statistics. For one thing, there’s a story that he originally decided to sign Flamini based on how far he ran in matches. However, figures from The Times last week show that there’s very little correlation between success and how far teams have run. So to be most successful you need players who are clever with the ball rather than just running a lot.

Here’s another statistic: out of 20 away matches against other Top 5 finishing teams in the last five seasons, Arsenal have won one, drawn three and lost 16. This is not the kind of record that fills you with confidence when going to Stamford Bridge. Mourinho hasn’t lost in 11 matches against Arsenal and Arsène.

Jeremy Wilson wrote in yesterday’s Telegraph how Alex Ferguson got the better of Arsène in recent years. Man Utd won ten out of the last 14 encounters between Utd and Arsenal in Fergie’s last five seasons, but at no time did Arsène try a different tactical approach – or if he did, not dramatically enough to make a difference. This is hugely frustrating for many Arsenal fans; contrary to what some would have you believe, you don’t need to be a top-level coach to spot the problems and have ideas on simple things to do to solve them. I’ve said this many times and I’ll say it again: I don’t want Arsène sacked because I recognise that as a manager he has many great qualities, but it is not wrong to criticise him. Implementing ideas successfully is what separates top managers from other managers and also from all the armchair pundits, but spotting the problems and solutions is not impossible for those of us who’ve never worked a day in football. 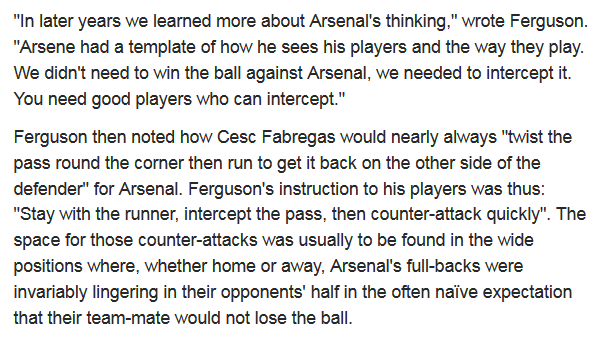 Arsène’s unwillingness to adapt to different teams and situations leaves Arsenal vulnerable to the thrashings we saw away from home last season. At his press conference this morning he has already spoken about the desire to put things right after last season’s 6-0 humiliation. Desire is important, but what’s more important is learning lessons. I tend to think there is little point in taking much of what Arsène says at face value (the Welbeck stuff, comments on Cesc, whether we needed a striker or defensive midfielder, etc etc), though I’m often not sure if he is being obtuse deliberately or if his thought process and way of expressing himself is slightly different to most of us – like George Galloway, but less dangerous. So he can say what he likes in press conferences, but the proof of what he really thinks is out on the pitch.

Arsenal can beat most teams most times because they have better players than most teams. The test is when we play teams who are as good, and that’s where Arsène has been found wanting in recent years. Has he learnt lessons from last year? Perhaps Arsène considers that with his experience he no longer needs to learn. We’ll see on Sunday.