Following my last post about the transfer window, it struck me that there was one player who dominated the early part of it for Arsenal fans: Cesc Fabregas.

Last summer we had a lot of ‘will he/won’t he’ rumours about a possible return. I never believed he would come back then, it was too soon into his lifetime ambition of playing for Barcelona. And so it proved. But another season went by, he fell slightly further from favour at his hometown club and it was all back on again.

Suddenly the infamous buy-back clause was on everyone’s lips: would Arsenal exercise the right to repurchase their former captain? Would he want to come back if they did? It’s fair to say that opinion was divided on the possibility of a Cesc return. Some see him as a traitor who faked injury and forced Arsenal to accept a low valuation for him by his insistence on only one destination. Others say he did a good job and was bound to leave at some point, we all knew that. Which side of that argument you sit on might colour your view of a possible return.
Arguments for and against a return were put forward in the first issue of The Gooner this season. On the one hand, said Mickey Cannon in his column, Cesc is undoubtedly better than nearly every other player we have, so if he improves the squad why not buy him? If necessary sell another midfielder to accommodate him. 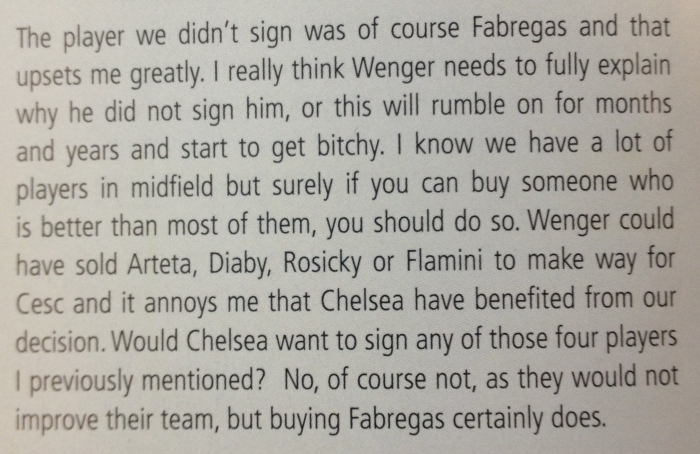 On the other hand, said Bernard Dowling, would we be so bothered if he weren’t an ex-favourite? There were clearly other gaps in the squad that needed filling first, so why spend a large chunk of resources on a player you don’t really need? Perhaps wanting him to return was driven more by emotion than it should have been, so let’s concentrate spending on what we need.
The thing is, that argument didn’t really work out, given that no defenders or defensive midfielders turned up at the end of the window to add to Calum Chambers and bolster the back line. Meanwhile more than enough money to buy Cesc and pay him handsomely sits in the bank still.

And of course Cesc going to Chelsea was not popular, even among those who didn’t want him back. Anyone but them.

Whether not buying Cesc back turns out to be a good or bad decision depends what happens between now and May. Chelsea win the League and Cesc is player of the season: Bad decision. Arsenal win the League and Cesc does his hamstrings again: Good decision. There are a million variations in between, but at the moment Chelsea’s squad looks to have a fair bit more depth than Arsenal’s so although I am largely happy with the best XI Arsenal can field, over a season Chelsea have the advantage. 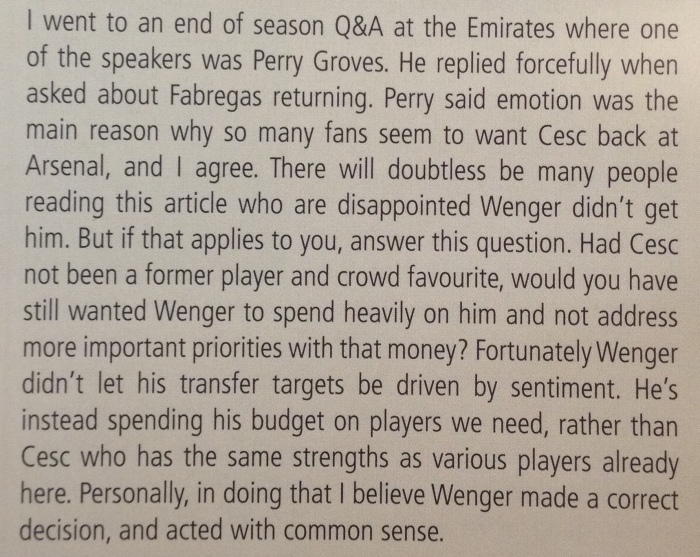 Unless Arsenal do win the League, or at least finish above Chelsea, then with spare money still left NOT buying Cesc is going to look like a bad decision. I can see this being quite a bone of contention, mainly because we don’t really know the key fact: Did Arsène turn Cesc down or did Cesc turn Arsenal down?

Most seem to think Arsène turned Cesc down. And most were prepared to forgive him for that as long as he spent the ‘Cesc money’ to plug the holes elsewhere in the squad. As that hasn’t been done, some are going to be rather less forgiving if we don’t have a storming season.

But maybe Cesc turned Arsenal down. Jose Mourinho has claimed he did. And if Cesc really didn’t want to sign for Arsenal then a buy back clause is about as much use as a tin of Brasso at West Ham. Arsène has done nothing to clear up the confusion, as all he’s said is: 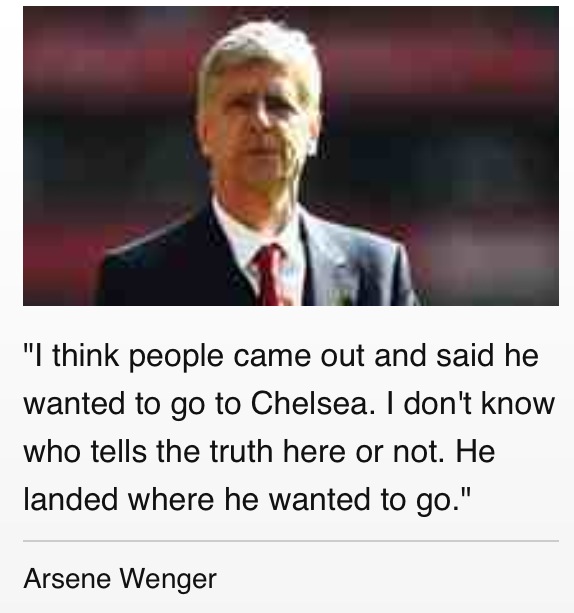 But you spoke to him, didn’t you Arsène? Surely you of all people should know what was going on? Why be so cryptic about it? Just tell us the truth. And what does ‘He landed where he wanted to go’ mean anyway? Some in the media have taken this to mean that Mourinho is telling the truth and Cesc’s first choice was Chelsea. I tend to think it’s a reference to the fact that Cesc’s wife and child have been in London the whole time he was in Barcelona, as Mrs Cesc’s ex-husband won’t let her other children leave town.

So if Cesc was leaving Barcelona then for family reasons London was always going to be his first choice. But which club? There are two big clubs in London, Arsenal and another richer but less classy one with a much shorter history. Cesc is a good enough player to walk into either team, lucky him. So either was possible. You’d think they’d both want him, but then Arsenal’s manager can be a little idiosyncratic.

Oh yes. This one is going to run and run because at the moment there’s no definite right or wrong answer. This is one where I accept we will have to judge it in May as only the events of the season can even get near to answering the question.

ps: I’d have taken him back, assuming he wanted to come. Improving the team and stopping a rival improving comes above my annoyance at his suspect hamstring issues and the manner of his departure.