You know the way everyone listens to Arsenal fans now and values our opinion, and when we say something the media really treat it seriously and use it as a subject for debate for at least a week? Well, they did when some Arsenal fans chanted ‘Boring boring Chelsea’ in a slightly ironic way.

Here’s what Giles Smith said about that in The Times. (He’s a Chelsea fan, by the way, but I’ve no evidence he is racist or even owns a laminator.)

Anyhoo, if they’re going to take everything we say so seriously, surely this is a chance to get a few other things on the agenda.

Like the chant, ‘Same old Arsenal, always cheating.’ I don’t know where this came from originally, but it always gets right on my nerves when sung by some bunch of northern monkeys whose team are gleefully kicking ten shades of crap out of Arsenal, then claiming they never touched anyone. Are Arsenal always cheating? Well, there may have been the odd moment, I can’t deny that. Pires may – just may – have gone down a little easily under the lightest of contact against Portsmouth to get a penalty that maintained the Invincibles record, and Eduardo and Eboue both had an incident or two. But really, this apparent reputation is obvious nonsense when you compare to other teams. Do Arsenal commit more fouls than other teams? No. Have Arsenal ever had two different players booked for diving in the same game? No. Chelsea have though, and were lucky to get away with only two. Have Arsenal ever had a serial diver like Bale or Suarez, doing it time and time again? No.

Here’s a picture of Gareth Bale that I freezeframed just before he dived a couple of seasons ago. I swear this is the closest the defender got to him before he went over. He was rightly booked. 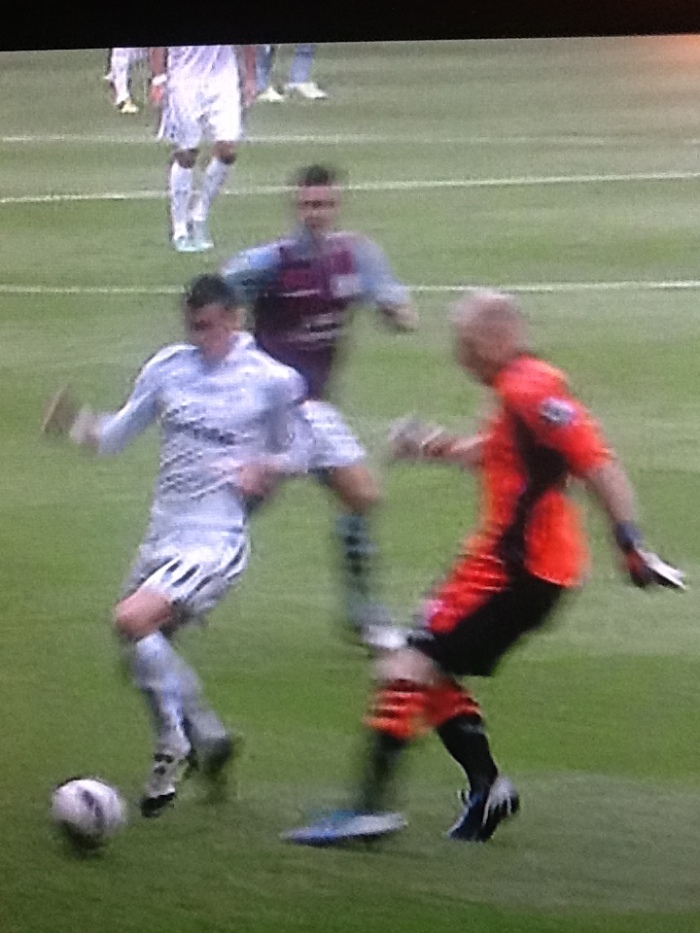 It would take a lot of analysis of numbers of fouls committed and then judgement of whether the ref actually made the right decision in order to work out a proper ‘league table of cheating’, and frankly I don’t have the time or energy. However, you can look at who has been booked for diving as one measure of which teams do a lot of cheating. I know it’s only one aspect, and some bookings may be in error, and all kinds of other things that stop it being a perfect measure, but let’s have a look anyway.

I couldn’t easily find official stats, but I was pointed to this table, which goes from 2008-14: 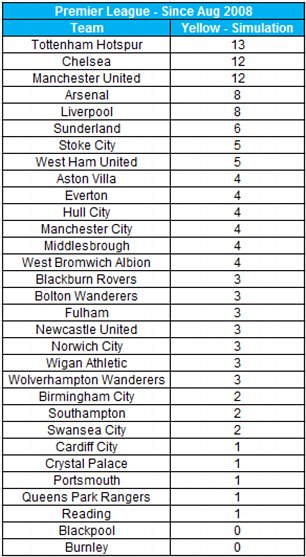 Now if this is true, then firstly I’m surprised that Arsenal have as many as eight. Eboue will be in there a couple of times, but I don’t remember that many others. No matter though, because there are three clubs who are all at least 50% more cheaty than Arsenal, including our beloved neighbours, Totteringham Hotspurts. Obviously their score will have gone down since, as they sold Gareth ‘Tom Daley’ Bale, who made up more than half of their total on his own, but Chelsea and Man U are also very very cheaty.
Man U have stopped picking Ashley Young and Adnan Januzaj so much these days, so they may be improving as well. Not Chelsea, though. I think they’re getting worse. As I said, the only Premier League team to have two players booked for it in the same game this season, Willian and Costa v Hull – a game where Cahill also blatantly dived, but got away with it.

So next time Chelsea visit Arsenal, perhaps everyone should strike up a quick chorus of ‘Same old Chelsea, always cheating’, and let the whole football media run with that one for a week or two. Should be amusing. It might even do some good.