It’s my now traditional update on Arsenal’s mega-cash balance. Bit of an anti-climax to be honest: slightly lower than this time last year, and that was after spending only £10m last summer on Cech, as opposed to the £30m+ on Sanchez the previous year, and £40m+ on Ozil the year before. However, the big transfers aren’t paid in one lump sum, payments are spread over 3-4 years usually, whereas Cech probably was paid for up front, so that might explain why more has been spent between June and November 2015 than June to November 2014. Plus no one of any note left the squad to swell the balance that way, and every time a squad member gets a new deal the wage bill rises a little more.

It’s not a big deal that the figure is slightly under the comparison figure for this time last year to be honest. And most of a football club’s income arrives in the second half of the season, so expect a big upswing again in six month’s time – and that’s before next year’s boost from the giant new TV deal kicking in.

Of course there would be £6m more in the coffers if Stan hadn’t taken it out to use as his small change.

Anyway, for the record, here’s the usual table and graph. 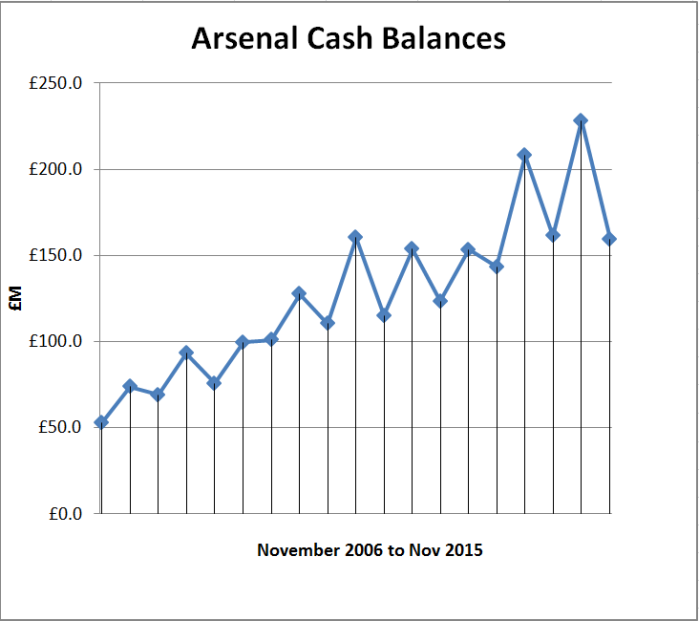 Will the figure go over £250m in May 2016? Will I need to extend my graph as a result? Will any of this money ever get used for anything other than to give Stan Kroenke a warm fuzzy feeling in the roots of his hair? Who knows.