Just posting this up as I put it on Twitter and it generated a fair bit of comment.

An interview with David Dein from the Arsenal programme in 1989 – sorry, ‘match day magazine’, as it had been retitled by then.

Dein, for all his faults, is a man who in my humble opinion not only understands football both as an ‘ordinary’ fan and a businessman, but worked in that way too. Many fans have risen to own the clubs they support, but their attitude then seems to change, and they start looking at it far more as a business and less as an emotional experience. Jack Walker at Blackburn is an exception of course, but if anything he was too concerned as a fan and didn’t really care about making it a sustainable business. He was also solely focussed on Blackburn, whereas Dein could see where football as a whole needed to go and he wanted to guide it there. I’m not for a second claiming that all his ideas were good ones, but reading his words again 28 years later does show how ahead of his time he was.

Also bear in mind that David Dein worked for the benefit of David Dein as well as (in his eyes) for the benefit of Arsenal and football. You can judge for yourself how much effort he put into the different strands of making football popular and wealthy, Arsenal successful and wealthy, and David Dein influential and wealthy. Clearly when it came to selling his stake in Arsenal, making David Dein wealthy was number one. But before that he exerted a massive and beneficial influence on Arsene Wenger. Other factors are involved, but since Dein left Arsenal no titles have been won and it took close to a decade to get a sniff of any trophy at all. Ivan Gazidis talks a good game, but deep down even Ivan knows that the combination of himself and Dick Law is not a patch on having David Dein negotiating player contracts and transfers.

So what was Dein saying in 1989, as football appeared to by dying from decades of underinvestment in facilities and 20-odd years of hooliganism? 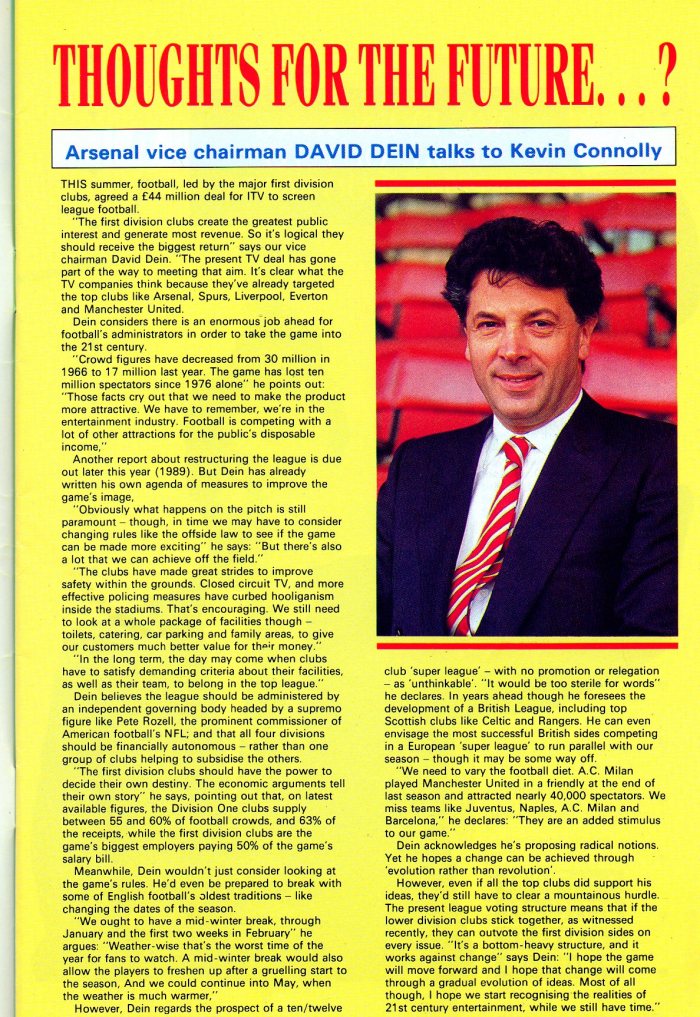