I thought I’d try and lower our water consumption by converting the downstairs toilet to flush using rainwater. This description might help anyone else who wants to try the same thing. (NB: there is nothing about football in this post. Not a single mention after this: #KroenkeOut.)

In principle it’s fairly simple:
• Set up a water supply
• Connect the supply to the toilet
However, you also need to ensure:
• The water supply is constant
• The cistern refill valve will work on lower than mains pressure – this proved to be the most difficult part

I already had a water butt collecting rainwater from a downpipe directly outside the downstairs toilet. I decided to set a bin at a higher level and direct the rainwater into that, using the existing butt as an overflow for additional storage. Longer term I will need a bigger container than the 80-litre bin, but I wanted to prove this worked before sourcing something bigger. I have other butts for different sections of roof, so there’s no shortage of water, I just need more of it in one place.

I knocked together a simple table with spare wood for the bin to stand on, then drilled 1-inch holes near the top for the inflow and for the overflow to the butt, and another hole at the bottom for the outflow. I used a spare washing machine hose for the overflow from bin to butt.

I had to buy a length of 15mm plastic pipe (which allows more movement than copper), a couple of connectors and a stoptap for the outflow from the bin. I drilled the wall from the outside to come through a few inches below the cistern – I already had a 12-inch bit, which was just long enough.

I thought it would also be useful to be able to easily switch back to the regular supply if I needed to, so I connected the new supply with the mains supply and then into the cistern. I’ve since learned that this is illegal without a non-return valve in the pipe due to the theoretical danger of contaminated rainwater being forced back up the mains pipe if both supplies were on. In practice the mains pressure is so much greater than the pressure from the rainwater supply that turning the mains supply on at the stoptap would push a continuous flow of mains water through my new pipework and into the rainwater bin outside, so I’m not concerned about this from the risk point of view. 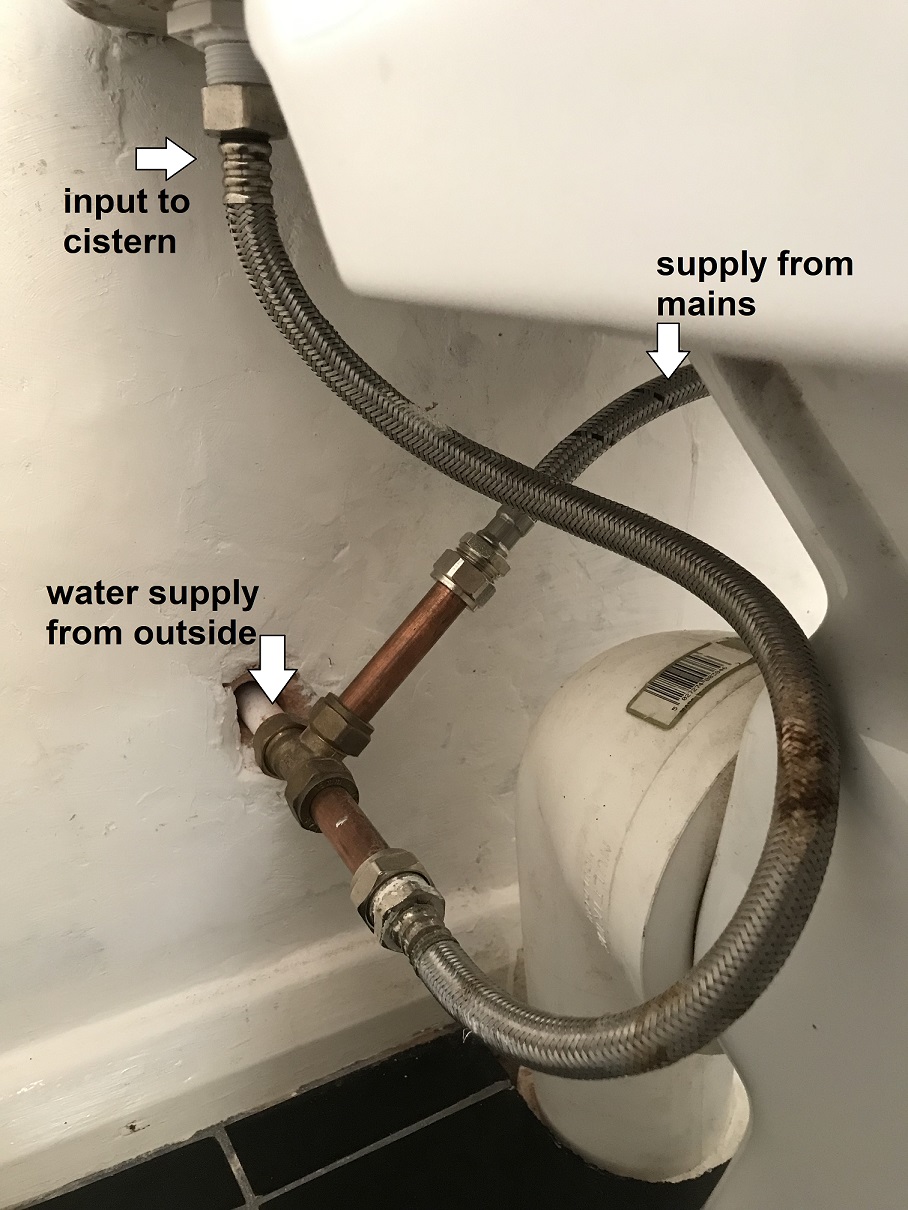 I also changed the mains stoptap to one with a lever rather than the usual in-line isolation valves that need to be turned with a screwdriver. In my experience the screwdriver type are not always robust or particularly effective at shutting off the supply.

With the pipework connected up, I tested the mains supply then switched it off, filled the bin outside and switched that on. The cistern filled – but very, very slowly. The incoming water was just a dribble.

The refill valve I was using was a Fluidmaster 6000 series Airgap. After some internet searching I found a video from 2014 posted by someone in the US who’d had the same problem with a similar Fluidmaster valve. He’d contacted Fluidmaster and they’d sent him a low-pressure rubber diaphragm to fit instead, and this had worked. I phoned Fluidmaster; they said I’d need to email them to ask about something like this. I emailed them; they never replied. So I bought a Fluidmaster 400UK073 cistern fill valve, which said on it “Universal. For high and low pressure.” I fitted it and tried again. This filled even more slowly – literally a drop at a time. Not as universal as Fluidmaster want you to believe.

More internet searching. I found recommendations that I should use 22mm pipe and have at least a metre of drop between my water tank and the toilet cistern. Both of these would give me some logistical issues.
I then found some discussion in the diynot forum.
One recommendation for a valve to use was the B671AC-ECO Torbeck® EcoFil Bottom Entry.

This looked like an over-complex design, so instead I ordered one from the same manufacturer with a simpler floating mechanism, like a small upturned cup. It takes slightly more room in the cistern than most of the modern designs, but not too much, as you can see in the picture.

The one I bought was a Torbeck B661AT (Wickes product code 420336 – although it’s branded as Torbeck, it still has Fluidmaster in small print on the back of the packaging – I can’t escape them). I fitted it and turned the water supply on. Success! The cistern refilled in a couple of minutes. A lot slower than at mains pressure, but perfectly usable. You can see in the picture a fairly decent flow of water coming through it. To give the maximum flow, I removed both of the flow inhibitors that come with the valve and also removed the filter, which it tells you never to remove.

The design of this Torbeck valve seems much more forgiving of any impurities in the water, such as tiny bits of vegetation that get through my very rudimentary filtering outside. The newer-style valves seem to be affected very easily by any solid objects in the water supply, no matter how small, even with a filter in the valve itself. Objects get caught in the rubber diaphragm so the valve doesn’t shut off properly and water carries on flowing and disappearing down the overflow into the toilet bowl. No issues with this so far. It’s working well and fills quickly and quietly every time. I’m now saving water and getting much quieter refills than when using the mains, which is an advantage at night.

7 thoughts on “How to use rainwater to flush a toilet”