It’s not a great day to be an Arsenal fan, so why not go back to a simpler happier time when Arsenal were champions and the fantastic new Premier League was shortly to begin. Here’s young David Dein to tell you just how great it would all be, interviewed in the Arsenal programme from the opening day of the 1991-92 season.

Dein assures us that the Premier League is not all about money, though he is good enough to admit that “Money of course plays a significant role” and “market forces must be allowed to prevail”. But of course “spectators” – I think he means supporters – would be best off, indeed they would be the “ultimate beneficiary”. And also the England team would prosper due to more time for the manager with players, because of course the Premier League would soon consist of only 18 clubs. I’m not sure when that’s happening, must be due any day now I guess.

To be fair, the extra money has certainly meant that the exodus of star players we were experiencing from England such as Brady, Platt, Gascoigne and, er, Hateley and Waddle did reverse. Now we have all the stars in the English league, from Manuel Almunia to Nikola Zigic. ALL the stars. 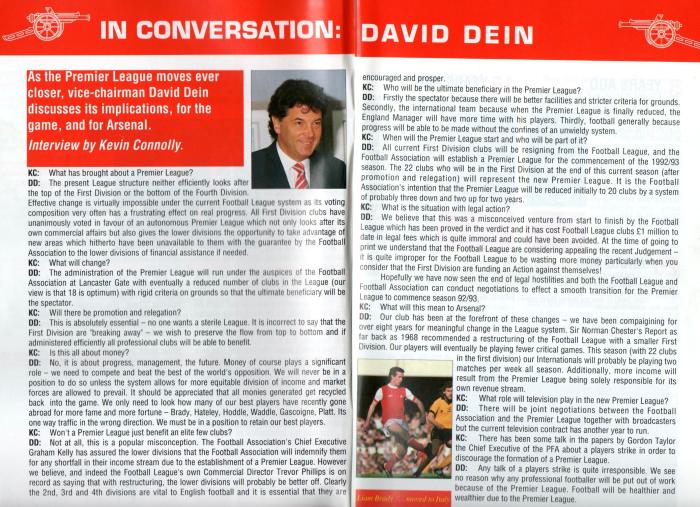