Here’s some journalism – and I use the term entirely wrongly – from the Daily Mail today, courtesy of @gingers4limpar who tweeted it last night from the early edition. It’s apparently written by Charlie Sale, who I see is on Twitter, but doesn’t use it much, so possibly no point in tweeting him to point out that ALL his facts are wrong. 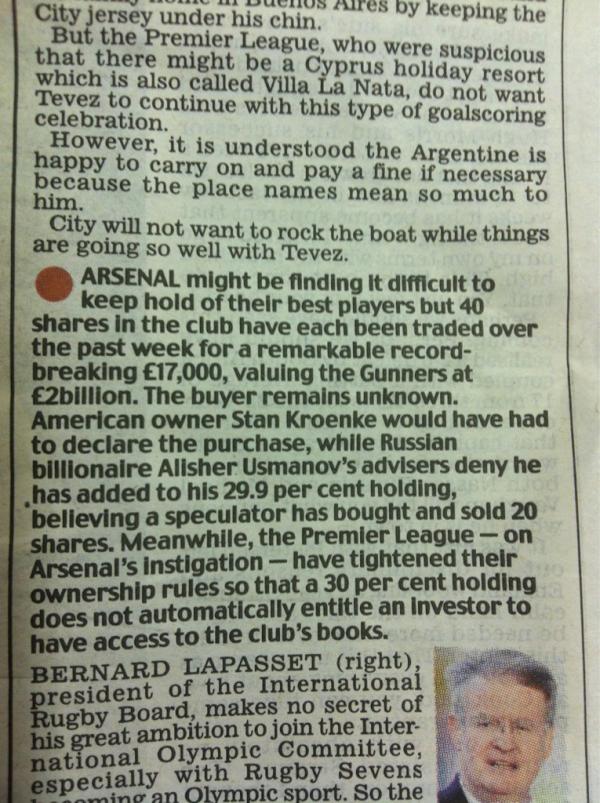 Specifically and firstly: as I’ve already explained, only 20 Arsenal shares were traded this week, not 40.

Thirdly, this does not ‘value the Gunners at £2billion’. The number of shares sold is so tiny these days that to be honest trades bear little relevance to the overall valuation of the club, but if they did, then the valuation would be £1.067 billion on the price from this week, or £1.073 billion if you go by the record. Either way it’s quite a difference. Stan would be delighted.

Fourthly, Alisher Usmanov does not have a 29.9% holding in Arsenal, he has a 29.72% holding. I don’t know how many his friends may have, or how many he may have arranged to buy at some future time with specific individuals (and nor do the Daily Mail), but right now he’s got 29.72% – which is quite easy to check as it’s on Arsenal.com all the time.

Fifthly, Usmanov’s ‘advisers’ (ie brokers) may have been of the opinion that a speculator was buying 20 shares and selling them on again, but any rational person can see that this is as likely as a Spurs title win. The profit on the sale figures quoted on Plus Markets before they corrected themselves would have been £2,000 total – before any costs. Who in their right mind is going to spend £340,000 on 20 Arsenal shares and then sell them immediately for a profit of £2,000? Finding someone to sell you 20 Arsenal shares in the first place is nigh on impossible these days, as there are only about 12 people left with that number or more, and two of them are Usmanov and Kroenke. You wouldn’t go to all that trouble for such a small profit, it would be months of work.

Then we move on to the Premier League and their rule changes, which as I said some time ago, will now clearly prevent Usmanov from automatically seeing Arsenal’s books if and when he reaches a 30 per cent shareholding. The Mail says the PL ‘have tightened their ownership rules’, whereas I’d say they’ve clarified them – they’ve changed the wording, not the underlying rules. Semantics maybe, but try telling a lawyer that kind of thing isn’t important. It used to be important in journalism.

For more useful facts on Arsenal shares, or if you just think the Daily Mail is a bit crap, follow this blog or follow me on Twitter: @AngryOfN5

5 thoughts on “Daily Mail in ‘All Arsenal Facts Wrong’ Shocker!”