Yesterday I asked the question:

If you have to choose one of them, which would you prefer as Arsenal owner, Kroenke or Usmanov?

I don’t want either as sole owner or even majority owner, but I phrased the question so that it just measures the popularity of the two gentlemen. It wasn’t meant to decide anything about the best ownership model for Arsenal.

Some people did object to the question and refuse to answer on the basis that they too do not want a single owner. Some feel it’s a choice between a rock and a hard place, to put it politely. However, there were over 1,000 responses, which give a fair spread of Gooners around the world.

I also asked where respondents were from, purely to see whether fans in one part of the world were more pro one of the shareholders than those elsewhere. I’ve taken it on trust that people replied honestly to that. 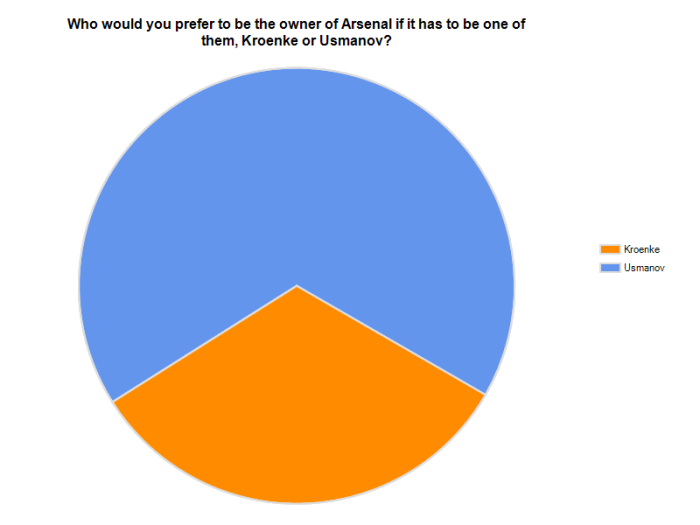 Now a summary of all the numbers:

NB: due to rounding and the fact that a few people didn’t answer both questions, all the numbers may not match exactly or add up every which way. Don’t bother complaining.

Graph of where respondents come from:

Graph of percentages by region: 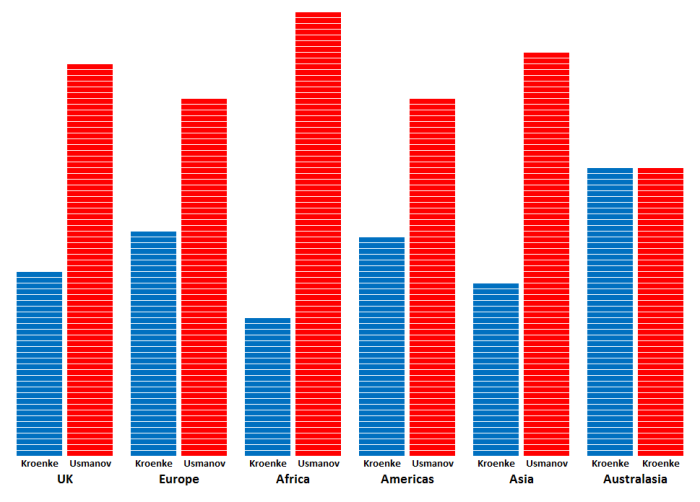 Graph of numbers voting by region (not including UK, as I’d have needed a much taller graph):

So there you go. I’m slightly surprised that Usmanov has such a healthy overall lead in this popularity contest, both in the UK and elsewhere. Fans clearly think the current regime could either do a lot better, or should be removed to let someone else do a lot better.

I won’t bother commenting further on what you can see for yourself, but a couple of final thoughts:

1 – We know Kroenke doesn’t love Arsenal, but anyone who thinks that Usmanov truly loves Arsenal also needs a reality check.

2 – A lot of people have commented that both the options here are unpalatable, so I’ll do another survey with more options. Without wishing to present things as leading questions, I hope there won’t be too many dimwits who think that Usmanov as sole owner is the only possible way to compete. It’s not, and Arsenal is too important to be owned by one person.

103 thoughts on “Who Do Arsenal Fans Want? Exclusive ‘Kroenke or Usmanov’ Survey Results”