I must say I have long been in the camp with a big flag flying saying “Walcott’s not worth it. Let him go if he wants to. We can spend the money better elsewhere.” Like I said, it’s a big flag. But I must admit he is looking more convincing in front of goal recently, putting away a higher percentage of chances – at least I think he is, but I ignore most stats so as far as this season goes I don’t know for sure.

I still say that Walcott has been indulged a lot and played (before this season) when his form didn’t deserve it. Often he has only shone in games against lower league opposition, or when coming on against tired legs. That’s all very well for a squad player, but I expect more from someone who thinks he should be a first choice centre forward.

Theo is a nice lad, probably good company, no doubt polite to his mum. When he arrived at Arsenal I waited for a fairly quick proof of his credentials as a future superstar. After a year or two I was starting to think ‘Perhaps he’s not good enough for Arsenal’. He was no Henry, not even an Anelka. After another year or two I was thinking ‘He’s not good enough yet, and I don’t think he ever will be.’ I was starting to class him with Wiltord. For the last year or so I’ve been saying, ‘We may as well sell him.’ But my mind is changed just a bit. I still think he needs to be far more consistent in his general play and in front of goal, but his finishing has definitely improved of late, and he’s showing signs of becoming a better all round attacker.

Where the flame of doubt still flickers is in the fact that he has only played a cameo role so far this season. If he starts every game will his form slide? I’m still yet to be totally convinced that he can be consistently top class for a top four club.

Below is a graphic from The Times yesterday with his appearances, goals, accuracy and so on for the last three seasons. The key points are that he gets the ball on target a very healthy amount of the time – last season 58.6 per cent, compared to an average of just under 50 per cent for Premier League strikers. However, his figures for goals per shot on target are lower than the average in each of the last three seasons. He’s only actually scored 28 league goals for Arsenal in his career – fewer than Van Persie managed last season.

I’m sure recent games have seen an improvement in the deadliness of Theo’s shooting. The only question is whether that’s a temporary form blip, or whether he really has moved up in class. If he keeps up the current form until January, I don’t see that Arsenal will have any choice but to pay him the salary he demands. 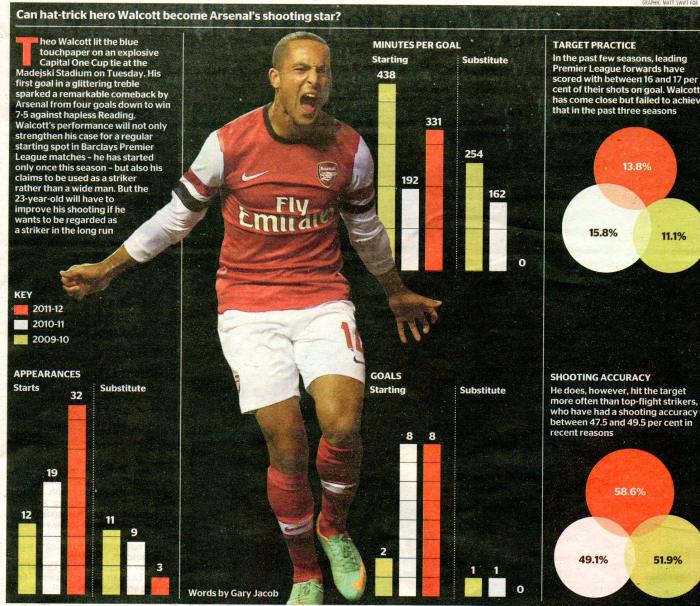