Last week The Times published a long piece about Alisher Usmanov, including his PR firm’s failed attempt to change his Wikipedia page without anyone noticing, which I told you about here. Here is the rest of what The Times said. It’s quite long, but can be summarised as:

Mr Usmanov is in the business pages at the moment because he is trying to float telecoms company Megafon on the London Stock Exchange for about $12bn. Mr Usmanov’s Wikipedia page was tampered with back in 2010. The Times have only broken the story now, despite having had plenty of opportunities over the last two years to tie it in to other Usmanov-related news. A suspicious person might think that The Times have broken it now because it coincides with his proposed flotation. Let me see now: The Times is owned by Rupert Murdoch; Rupert Murdoch has many telecoms interests; Usmanov is doing a telecoms flotation. Coincidence, I imagine.

Interestingly, if you go to The Times website to look for the Usmanov articles, you can see that they are “the subject of a legal complaint by Alisher Usmanov.” Mr U probably thinks they are being a little unfair on him. 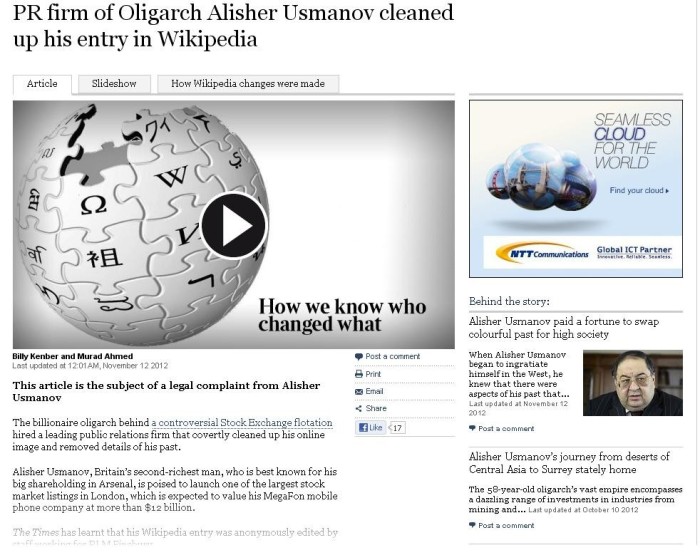 Personally I don’t care much about Usmanov’s share flotation or any legal arguments with The Times, I am more concerned with his effect on Arsenal. What is his motivation? I believe his interest in Arsenal is a combination of factors that probably all have different weightings in his mind:

You’ll notice the one motivation I’ve left off this list is making a profit. I don’t think Usmanov has any interest in making a profit out of Arsenal, for these reasons:

There is a chance that the clubs at the very top of the European game might start making profits more regularly in future years, due to better TV and digital marketing deals around the world, and to a lesser extent sponsorships, but this depends on controlling costs, which has proven extremely difficult to do. I don’t see that any sane investor would want to rely on it.

‘What about Stan, then?’ I hear you say. ‘Isn’t he in it for the money?’ Largely, yes, but he’s also into sports and he accumulates clubs of different kinds for fun. He probably also believes that he can sit on an increasingly valuable asset with little danger of the value going down, given the infrastructure that Arsenal had handily put in place just before he came on the scene. So although he was sold the idea of Arsenal ownership on the basis that he wouldn’t need to put money in, I don’t think he sees any need to take money out either. Stan may believe he’s going to take profits out of Arsenal on a regular basis, but I’d be surprised if he succeeds in any meaningful way. If he does it will mean that owners in general have won the long battle with players for control of the biggest slice of the pie – a battle that has been going on since at least the days of Herbert Chapman (who complained about having to pay young players their maximum wage of £5 a week). And if Stan gets to a position of taking money out, then others will be too.

I must say, if Stan is so determined to get regular profit out of Arsenal, you’d think he’d be putting every effort into replicating Man Utd and Bayern’s commercial deals, rather than the half-arsed attempts that seem to be going on at the moment. But he doesn’t appear to be that bothered, so either he’s intending selling up soon anyway, or he is in for the long haul capital appreciation route.

Stan does of course own half of Arsenal Broadband, which runs the website and handles overseas broadcasting rights in some way, but he’s not raking money out there at the moment. When I’ve got time I’ll come back to that subject. In the meantime, as far as off-field activities go I’m just waiting to see whether Usmanov’s Christmas present to Kroenke is an announcement that he’s reached his target of 30 per cent of Arsenal shares. Then we might see some cranking of pressure from the Red & White camp come the January transfer window.

18 thoughts on “Usmanov’s Motivation: Surely Not To MAKE Money From Arsenal?”