No surprise that most people who voted think that Arsene needs to spend more than they think he will spend. (He does realise that spending the club’s money doesn’t affect his salary, doesn’t he?) 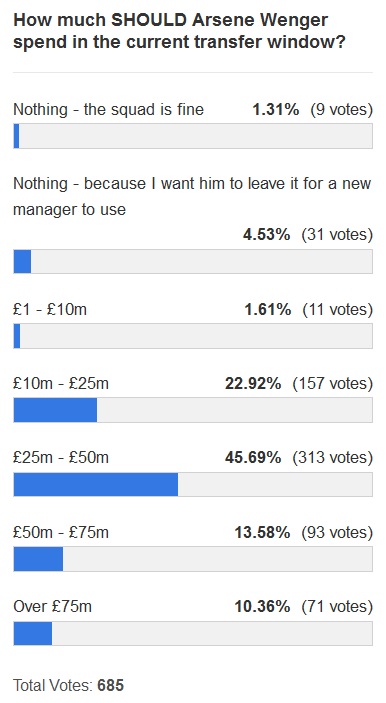 A few votes for ‘The squad is fine how it is’ – come on, you’re not serious are you? You really don’t want to go back to the days when we had genuine world class players in several positions? You’re really not bothered about goalkeeping cover and competition, and a midfield strongman?

At the other end of the scale does anyone genuinely think Arsene Wenger would spend over £75m? That would suggest unprecedented levels of schizophrenia in the manager.

Most of course went for more of the middle ground, with almost half thinking he’ll spend £10m-£25m but wanting him to spend £25m-£50m – which let’s not forget Arsenal could afford.

My gut feeling is that he might spend a few million, but not over £10m. It’s not usually his style. Though I live in hope – until nothing has happened by January 20. The unknown factor in my calculation is Theo: if he goes then the question is for how much, and what kind of replacement – if any – Arsene wants. It absolutely wouldn’t surprise me if Theo went and no one came in.

Of course as Liverpool have proven spending is not in itself the answer. You need to spend on the right players and make them play in the right system. In many ways it doesn’t matter how much you spend on them if it works. £1m or £10m, who cares if the team gels and success follows.

One £20m flop is a big problem for most clubs, Arsenal included, but buy 20 players for £1m each and you might get three or four gems. And no one complains too much if the rest are duds. Is this what Arsene is doing? Has he lost his bottle and won’t take the risk of buying big? Will we only ever get youngsters or fairly safe (but not top of the range) bets like Arteta and Podolski as long as Arsene remains in charge? Discuss.