Where to start with the abject performance of Arsenal yesterday? Perhaps with the preview from The Times yesterday morning.

This reminds us that we managed to spank at least six past Blackburn three times since 2006, and that was when they were in the Premier League, not some lower division they inhabit now. It also has the worst graphic ever, to show how many ‘failed campaigns’ Arsenal have had since winning a trophy. Whoever came up with that as a graphic needs shooting.

More usefully, the statistical form and class guide estimated that there was a 77 per cent chance of an Arsenal win, with only a nine per cent chance of Blackburn winning. Let’s look on the bright side: The fact they did win shows how great football is! Unless it’s happening to your team, of course. Or unless Arsenal threw the game for the benefit of an Asian gambling ring. Yes, perhaps that explains it.

Arsenal and Blackburn also met in the semi-finals of the FA Cup back in 1928. As The Times tells us, Blackburn were second best for much of the game, but won with a single goal in the second half. This is oddly familiar.

(The picture looks to me like Charlie Buchan leading Arsenal out for the match in his last season, five years before we switched to white sleeves.)

We should have beaten Blackburn, of course we should. But if we hadn’t and it was a one-off poor performance, where we’d dominated possession and hit the woodwork, and only Gervinho’s execrable finishing meant we couldn’t score, then most would probably be a bit more forgiving. It’s the continued lack of consistency, the scoring six or seven in a game one week then failing to even mentally turn up the next week, that’s what frustrates so many Arsenal fans. However you spread the blame – and surely everyone thinks that some blame must be attached to all of the Board, manager and players – it’s a bad situation and it seems to be getting worse.

My friend Kevin Whitcher, the Editor of The Gooner, has stirred up a bit of a storm today by suggesting that fan-power in the shape of sustained anti-Wenger chanting is now needed to get rid of the manager and start a rebuild. I’m not convinced about the tactic, but I am increasingly frustrated by Arsène’s seeming inability to motivate his squad and achieve results.

Perhaps it’s worth comparing the current situation with the one 30 years ago (is it really that long?), when Terry Neill was sacked – the last time fans turned on an Arsenal manager in a big way.

On November 29, 1983, Arsenal lost 2-1 at home to lowly Walsall in the League (Milk) Cup fourth round, having seen off Plymouth Argyle and someone called Totteringham Hotspurts in the earlier rounds. The Walsall match was a repeat of Arsenal’s most famous defeat to the same club in the FA Cup in 1933. In 1933 Arsenal were the best club in England, possibly the world. In 1983 the league table looked like this at the time of the Walsall defeat:

Arsenal languished in thirteenth place in the 22-team division. This league form and the gradual decline from regular cup finals after Brady and Stapleton left meant that the knives were already out for Terry Neill. You could say we wanted our Arsenal back – at least the one that Neill had presided over in the late seventies, if Bertie Mee’s 1971 vintage was out of reach.

This is Neill’s message in the programme for the next match after Walsall, at home to West Brom:

It’s the message of a man who knows he’s under pressure, talking about everyone accepting responsibility in a bid to deflect a little from himself. I’m sure others did deserve blame too, but a secure manager would have held his own hands up without pointing to others. By this time Neill was not secure.

The position worsened when we lost that match to West Brom by a goal to nil, then lost the next match away to high-flying West Ham. That was the final straw, and Neill was sacked on 16 December. The programme for the home match the next day featured this message from the Chairman: 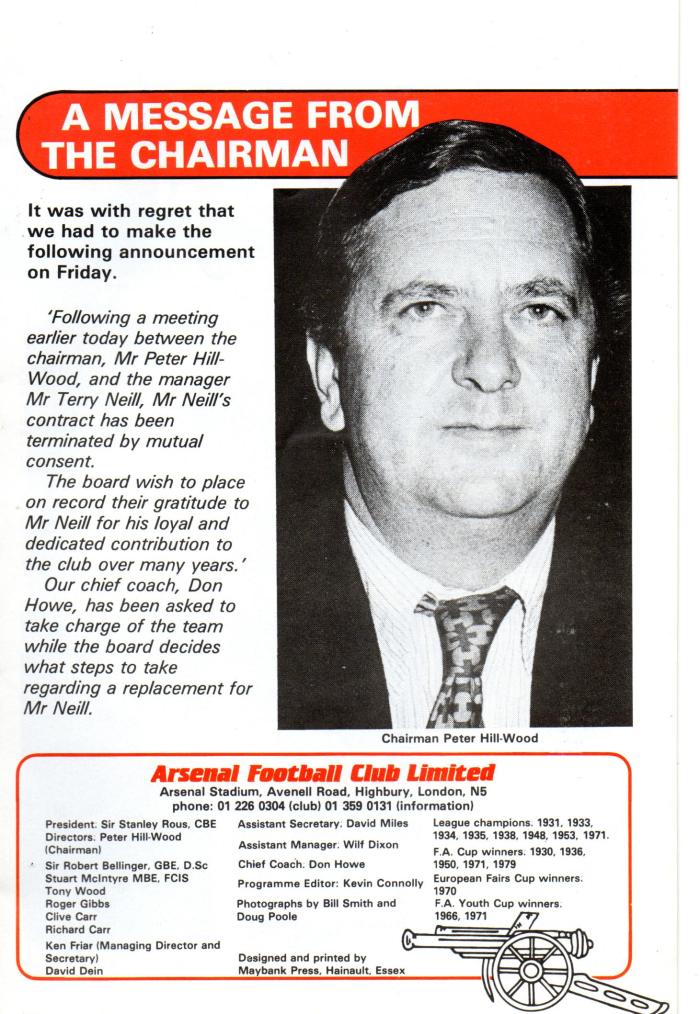 “Mutual consent”? Not sure about that, Peter. As a side note, they announced the, er, departure on the Friday, and managed to get it into the programme on Saturday. Usually they couldn’t include results from midweek games in Saturday programmes because they’d already gone to print, but they managed this!

Naturally Arsenal won the game that day, plus the next one against the Totts (4-2). The revival eventually took us to sixth place at the season end under Don Howe, but we didn’t set the world alight for a few more seasons after that.

Back to the present: Is Arsène likely to leave mid-season ‘by mutual consent’, even if we lose the next two league games and are beaten by Bayern? I doubt it. Like Neill, we are seeing a manager in something of a decline, though the heights he hit were far greater than the Arsenal of 30 years ago. We still have some way we could fall.

One thing that remains the same is that it probably would still be PH-W making the announcement of a change, but he no longer makes the decisions. I don’t see Stan Kroenke sacking Arsène Wenger anytime soon, however much pressure supporters in the stadium put on. My feeling is Kroenke will be thinking, ‘We’re paying the guy £7m a year, he’s got one more year on his contract, let him get on with it. If he doesn’t improve things maybe don’t give him another contract, but he’s not doing that bad.’

Stan might change his mind if season ticket sales stalled, the waiting list disappeared and none of the corporates renewed their box deals.

Of course Stan may also be thinking, ‘I don’t give a crap, I’m selling to the Russian in the summer anyway.’

I’m not the type to hope Arsenal and Arsène fail completely just to force changes. I’d rather stay top four and in with a fighting chance. I’m just worried that maybe it’s just going to prolong the agony.