Conspiracy theorists: What a bunch of idiots.

Some people would have you believe that there is a conspiracy among Premier League referees to make Arsenal do badly. Apparently this was even going on in Saturday’s match against Reading. Obviously it wasn’t working very well, as Arsenal won 4-1, but at one point during the game, after an offside decision was apparently missed, I saw this tweet:

“At what point do we drop the line that it’s terrible officiating and say that maybe, just maybe, it’s deliberate?”

Hmm, well at no point if you’re a reasonable level-headed person. Now maybe the author was being ironic or sarcastic, or just having a little joke – we all know that subtleties can be hard to detect in the written word, especially when you have a maximum of 140 characters. But then some replies appeared too:

Basically all the replies were in agreement that something funny was definitely going on. Those dastardly officials were doing everything they could to make Arsenal lose!

Do me a favour.

The obvious explanation here is the correct one: officials don’t get everything right. Sometimes they have better days than others, but they generally do their best. They don’t have the benefit of slow-motion or replays or different angles, they see everything once in real time at normal speed from one angle. There are 22 players on the pitch, many of them move quite fast, they often block the referee’s view, and even more often are trying to gain any advantage they can for their team even if it means breaking the rules or telling blatant lies. Of course some of the officials’ decisions are going to be wrong!

For offsides, the linesman/assistant is obliged to keep up with the furthest forward attacking player and keep one eye on him, one eye on the last defender and at the same time watch who has the ball and where and when it’s being kicked. Then he has to make a split second decision about whether an attacker was further advanced than the last defender, even if the ball was kicked from 60 yards away and several players are moving in opposite directions. It’s amazing they get so many of them right!

I’m not going to debate the rights and wrongs of officials using replays or the fourth official getting involved, but the fact is that under the present system officials will get things wrong from time to time. That doesn’t mean there’s a conspiracy.

I’m also not going to bother looking at every offside decision in a game and try and ‘prove’ any bias from it. But I will look at two penalty decisions from the Arsenal/Reading match, one given and one not given.

First, the foul on Olivier Giroud by Stuart Taylor after Giroud tried to flick the ball over the advancing keeper into the net. Was this really a foul? Yes it was. Did the referee see it? Yes he did. Does it prove he was biased because he didn’t give it? No it doesn’t. It should have been a penalty, no doubt about it. Giroud was upended by Taylor in the penalty area with the ball still in play. 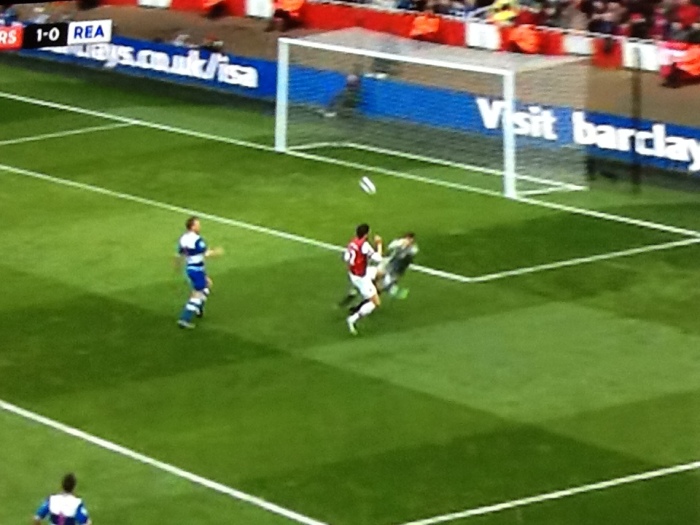 However, the fact is these are never given. This is not bias against Arsenal, this is the same wrong treatment for everyone. The unwritten rule is this: “If a player has already taken his shot the keeper may charge into him without being penalised.” It happens all the time. I can only assume refs think that if the shot has been taken then the keeper is not stopping a goalscoring chance, so there’s no issue. Usually the ball either goes in – at which point the attacker doesn’t usually care about the foul – or the shot goes wide, so the ref lets it go. This happens at least once in probably half of all games. Look out for it. There’s no bias, it’s just the unwritten rule that refs live by.

Note that the unwritten rule only applies once the shot has been taken. Push it past the keeper and get clattered and a penalty is usually given.

Now the penalty that Arsenal got against Reading, from which the fourth goal was scored. Blatant foul, wasn’t it? Certain penalty. Ox’s legs taken away, no doubt about that. Except it wasn’t a penalty because it wasn’t actually committed in the penalty area. Here’s a picture of the moment of contact. 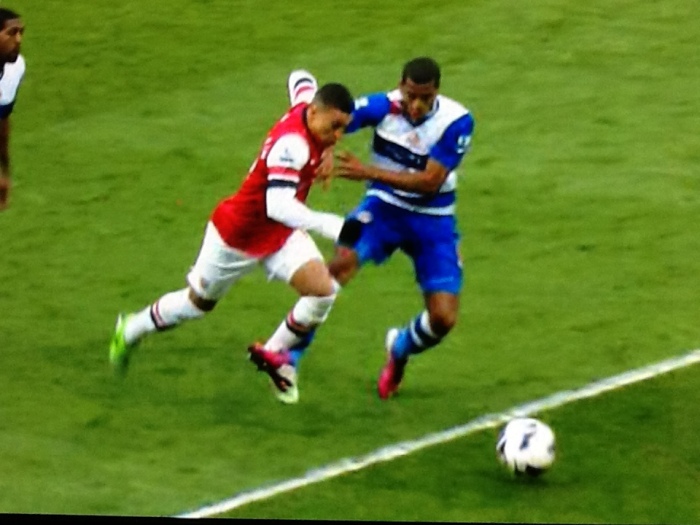 All four feet of both players are clearly well outside the line of the area. Now, if the officials were so determined Arsenal should get nothing, why give a penalty when it’s not even in the area? They’d surely avoid giving anything even if they thought it was inside, and then say afterwards, ‘Well it looked outside to me’. But no; penalty given with no hesitation.

All we can expect from officials is that they make a reasonable judgement based on being in a reasonable place to view an incident (once in real time, don’t forget). By and large that happens.

So to anyone who persists in shouting ‘Conspiracy!’ whenever something goes against their team, get a grip. You’re just embarrassing yourself.

18 thoughts on “Arsenal v Reading: Not Good For The Conspiracy Theorists”