Two questions in the title, but the media at large normally treat them as one. In this world of immediacy, whoever is on top RIGHT NOW THIS SECOND is deemed to be superior. But as we know, the League season is a marathon not a sprint. And the history of football is an ultra-marathon, or maybe the journey of Voyager 1 towards the stars.

So let’s look at this ‘power shift’ stuff with a bit of perspective.

Firstly the bad news for Arsenal fans: Arsenal have got worse in recent seasons, and Spurs have got better. I think we can all see that without resorting to too many statistics. In fact, according to Daniel Finkelstein in The Times, Spurs are now better than Arsenal for the first time since his database was invented. 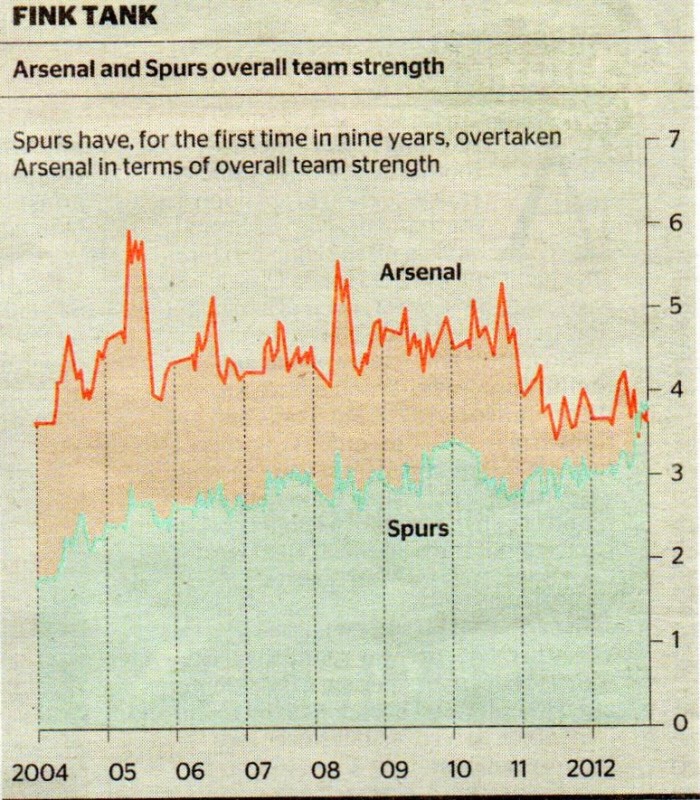 For those unaware, D Finkelstein writes a regular column in The Times using data from a database maintained by a couple of boffins that covers all aspects of football performance. Being a cynic where football stats are concerned, I treat a lot of it with caution, but it does provide fairly solid info on longer term trends, which is what we’re talking about here.

The graph says Spurs are ahead for ‘the first time in nine years’, but we know it would be about 18 years if they had the data. Interestingly, if you’re at all interested in Spurs, good old ‘Arry lowered Spurs’ class while simultaneously taking them to their highest finish in God knows how many years. All down to their inconsistency, apparently.

And inconsistency is probably why Arsenal’s class is declining a little, helping Spurs to catch up. But Arsenal aren’t a hopeless case, they’re still part of the elite. The problem is there is only room for an elite of four, and as the Totts have moved up to join us and the others it’s getting to be a bit of a squeeze. Which is presumably why the ‘race for fourth’ seems to get harder every year.

However, this hardly constitutes a power shift, and in recent weeks the outlook has got rather better for Arsenal. At the time this was published in The Times, 9 March, the stats experts calculated that Arsenal had only a 34 per cent chance of a top four finish; Spurs’ chance was rated at 81 per cent. Before last weekend’s matches the odds had changed such that Arsenal’s chances were rated at 62 per cent, with Spurs at 58 per cent. After another Arsenal win and a Spurs draw, and a situation where Arsenal’s fate is in their own hands for the moment, it’s now 76 per cent for Arsenal and 42 per cent for Spurs. A win against Norwich should see those odds improve yet further.

Power in football is dependent on many factors, mostly of course money, but also stability and a host of other minor factors. So Spurs have got better, okay I accept that. But are they more powerful? Do they have more money (relative to others) than they had before? Do they have a proven PL manager? Do they have top quality players queuing up to join? State of the art facilities? A big shiny stadium? No. They may have marginal improvements in some of these areas, but largely they are still behind Arsenal, as they are if you look at history, influence and worldwide standing in the game.

So they may be lucky enough to get the odd season where they finish ahead of Arsenal, but a ‘power shift’ is going to take a very long time. With luck, none of us will ever live to see it.

10 thoughts on “Is There A North London Power Shift? Are Spurs Now Better Than Arsenal?”