I am reliably informed by Tim Stillman, aka @LittleDutchVA, that if you went to every Arsenal away Premier League match last season you would have spent £840 on tickets alone. As he did.

Had you done the same in 1976-77, it would have cost you £28.25, assuming you went for the cheapest option every time. Or just under £41 if you chose the most expensive ticket at every ground. This page from the first programme of that season has all the details. 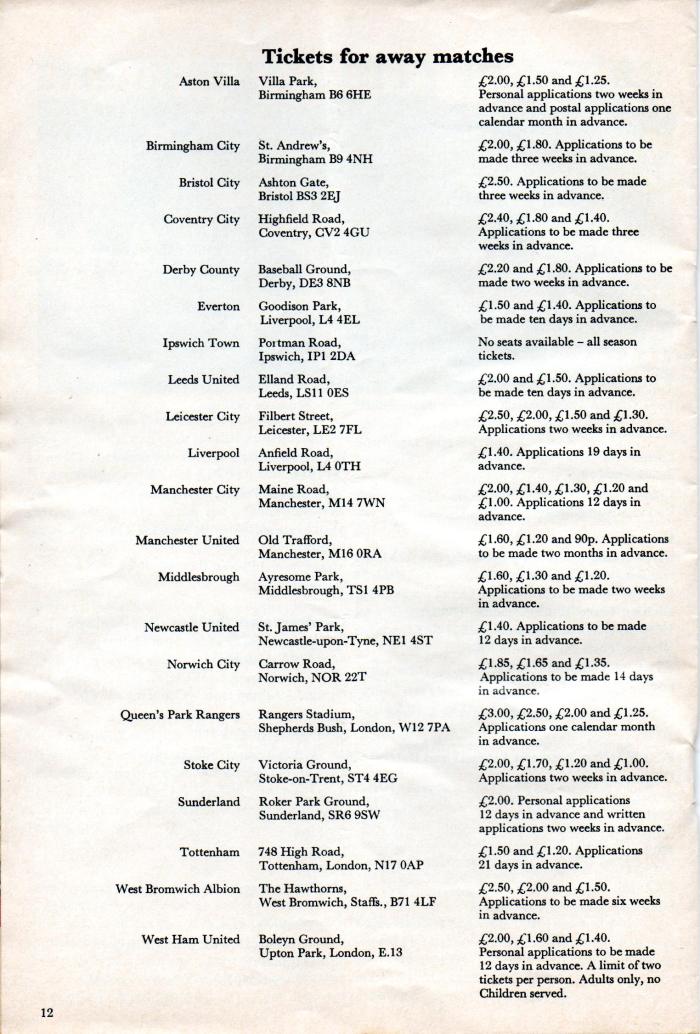 This means that the price of going to all aways has gone up by 2,900% in 36 years. Or put another way, it was 3.4% then of what it costs now. The cheapest ticket in ’76-’77 was just 90p at Man Utd, while at Bristol City you couldn’t pay less than £2.50. You weren’t even allowed to go to Ipswich – home season tickets holders only – but as the top division had 22 clubs in those days you still got one more match than at present.

Interesting also that West Ham was ‘Adults only, no children served’ – presumably due to all the x-rated violence going on in the East End. To be fair I think it just means that children couldn’t buy the tickets, as opposed to being banned from the ground.

The same programme has the squad list for the year, with their previous club. Of 23 players in the first team squad, just six were signed from Football League or Scottish League clubs and one from a non-League club in Scotland. Everyone else was taken on as a schoolboy. Apart from a goalkeeper, we could easily have fielded a full team that came up from the club’s youth ranks. That looks impossible ever again. 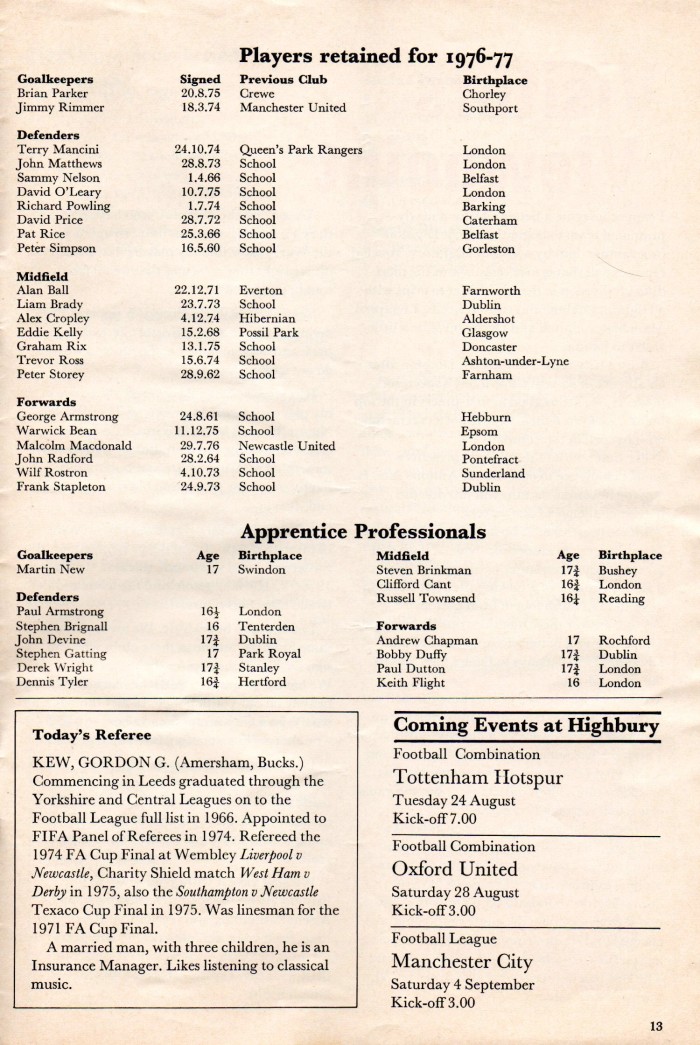 In contrast, when you look at the list of apprentices, there are only two names I recognise – John Devine and Steve Gatting. Both made it into the first team for a while, but neither made a huge mark.

Finally, the ‘Visitor’s Viewpoint’ column is written by Bristol City manager Alan Dicks, on the occasion of his team’s first match in the top division since promotion. He starts by saying this:

“I cannot imagine a better way for a newly-promoted team to begin their First Division programme than by a visit to Highbury. Arsenal represent all that is so revered about the most difficult division in the world. Get to grips with a Highbury debut, and trips to Leeds, Liverpool, Man Utd and Derby must be a little easier to handle.”

Bear in mind this was at a time when Arsenal had just had two of their worst seasons ever in the First Division, finishing 16th and 17th. Leeds, Liverpool and Derby had been Champions within the last four years, and Man Utd were at the time the only English club to win the European Cup. Now I’m sure there is an element of buttering up your host for the day, but it also showed that despite some poor seasons Arsenal were still considered one of the giants of the game. It was only five years since the club had done the Double, at that time still considered an almost impossible feat. Arsenal had been big since the 1930s; they have not only become big since the 1990s.