It was Paul Gascoigne who once said “I don’t make predictions and I never will.” But I’m bolder than Gazza – or not, depending on whether you see through his unintentional bluff.
Either way, I am prepared to predict this season’s top four in the Premier League. This is nothing new, but what is new this decade is that I’m prepared to seriously predict Arsenal will win it.

To be clear, this isn’t one of those predictions like Spurs fans do, where they say every season ‘This is our year’, and even if they believe it the rest of us know it’s as likely as Santi Cazorla winning the Olympic high jump. While carrying Mertesacker on his back. Nor is it a Louise Taylor (of the Guardian) type prediction, where she goes for Spurs (2013-14) because they’ve bought well (rare), or Liverpool (2014-15) because ‘Brendan Rogers is arguably the Premier League’s best manager’ (irrefutably untrue).

No, there is a bit of logic in my prediction. So in current internet style, here are my top <insert whatever number I get to> reasons why I think Arsenal will win the Premier League this season:
1 – Arsenal have a settled squad. Doing a Spurs and buying eight players and expecting them all to assimilate is the optimism of a madman. You can have too few new players, but if your team did pretty well last season too few is better than too many.
2 – They have addressed one of the biggest deficiencies from last season: the goalkeeper’s position. Only one signing of note so far, but a good one. Highly experienced keeper who will bring far greater stability to defending. Maybe not 15 extra points as some have claimed, but there will be benefit.
3 – Retaining the title is hard. Even the Invincibles-era Arsenal couldn’t do it, and since then Chelsea managed it in 2005-06, then there was a Man Utd hat-trick up to 2008-09, but no one since. The Man U hat-trick was before Man City were a serious threat, and Arsenal had gone off the boil, so it was a two-horse race with Chelsea, and the Blues were swapping managers like I change my pants. So different times; things are more even in the top pack now.
4 – Who else is there? Well, three obvious candidates, it goes without saying. But although it’s more of a four-horse race now, both Manchester clubs seem to have lost some edge for the moment. Pellegrini didn’t seem to inspire his squad last season and they’re aging now. United have stabilised post-Fergie, but Van Gaal still seems to be trying to mould a team into a shape that it doesn’t want to be moulded to. Arsenal look stronger than both to me right now, despite finishing behind City last time. Both Manchester clubs will no doubt have some brilliant days, I just can’t see them grinding it out. Chelsea can grind, but it’s harder to grind the second time than the first.
5 – And apart from them, who is there? No one. That’s the thing. This isn’t the 1960s; you’re not going to get small town clubs like Burnley or Ipswich winning the League, or Forest or Derby in the ‘70s, even Villa in the ‘80s and Blackburn in the ‘90s. Money talks louder than ever, so realistically the only other club in with a shout is Liverpool. But it’s a very small shout. Very, very small. So I’ve discounted it.
6 – The Mourinho hoodoo is broken. Yes, it was a ‘friendly’, yes it was pre-season and maybe not everyone was match fit. And yes, winning the Community Shield doesn’t usually mean anything in the context of the season to come. But in this case the Arsenal players now know they can beat Chelsea under Mourinho. If that gives them an extra five per cent belief for the next meeting, that might be enough to swing it, who knows? If Chelsea had won at Wembley the nagging doubt would still be there for Arsène and his players.

7 – Two FA Cups have built confidence. The FA Cup isn’t as ‘major’ a trophy as it was, but it’s still a trophy, and retaining it is especially great for confidence. The players are hungry for more glory, and believe they’re capable of it.
8 – Injuries: maybe the perennial Arsenal injury crisis is at last coming to an end, thanks to the magic fingers/sponge of Shad Forsythe (I write this as Wilshere has just been confirmed as out for months, but there’s always going to be one).
9 – Giroud’s hair. All right, don’t be a twat. We’ll stick with eight reasons.

So my prediction for the top four in the Premier League this season is:
1 Arsenal
2 Chelsea
3 Man Utd
4 Man City

Now I fully appreciate that many (including Arsenal fans) will say there are equally good reasons why Arsenal won’t win it, eg:

To which I’d reply: 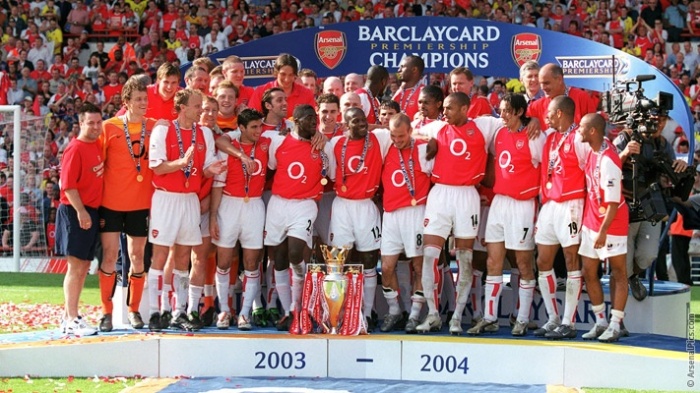 To be honest I think it’s pretty even between Chelsea and Arsenal as things stand, I would only be surprised if one of those two doesn’t win it. So I go for Arsenal on the basis of the broken hoodoo as much as anything. I may be wrong about that, and I may even be completely wrong about everything else too, and have to watch City and Utd run away from the London clubs (and Spurs) from the first match. That’s the thing with predictions: however much logic you put into them, they very often turn out to be complete bollocks (don’t they, Louise Taylor?).

One thought on “‘I Don’t Make Predictions And I Never Will’, or ‘Why I Think Arsenal Will Win The League’”