It’s been a great achievement for Arsène Wenger to keep Arsenal in the top 4 every year for 20 years. Just saying that upfront so I’m not accused of ignoring it.

I keep seeing the chart comparing Arsène’s 20 years of finishing positions with the previous 20 years, and naturally the Wenger years look better – mainly because everything is in the top 4, while the previous 20 years included some poor George Graham years and some poor pre-George Graham years too. And no one can deny the consistency of the Wenger era, nor the achievement of 100 per cent top four finishes – and it is an achievement, whether you like it or not. It might not be the achievement you’d prefer, but that’s another argument. However, claims that the Wenger era has been Arsenal’s ‘best ever 20-year period’ or ‘best ever era’ don’t really work for me. You can’t even claim his first ten years were the best ten years ever for Arsenal.

I’d also say that comparing 1997-2016 to the previous 20 years is flawed, because 1977-1996 is a totally arbitrary time. It covers several managers’ reigns and football at the start of it was completely different to football at the end. There are differences between 1996 and now, but they’re far less than the seventies to nineties. So if you’re going to compare, then pick something more comparable. It’s like all the artificial form stats the media quote, like ‘Man City have only lost once in their last 17 matches’ – you know immediately that in that case they’ve lost two in their last 18, and quite possibly three in the last 19, otherwise the meeja would use a higher figure.

I’d argue you can split Arsenal history into several eras, but they’re not all the same size. To be honest it would be remarkable if they were. So we’ve got: the Woolwich era; Highbury pre-Chapman; Chapman and his ‘boot-room’ successors, Allison and Whittaker; the Crayston to Wright years; Mee to Rioch; and then Wenger. Arguably Mee to Rioch is three different eras of ten years each: Bertie Mee; Terry Neill / Don Howe; George Graham (and Bruce Rioch just to make up the numbers). In a sense the Rioch year belongs more to the Wenger era than the Graham years, as the David Dein influence came to the fore with the signings of Bergkamp and Platt, a major turning point from the sterile end of George Graham’s reign. However, the Wenger chartists wouldn’t want the AW record sullied with a fifth place, so I’ll leave Rioch in with Graham, Mee and the others.

It’s all still a bit arbitrary, I’ll grant you, but better than taking a random point of 1996-97 and going back in 20 year jumps, just because Arsène has been around for exactly 20 years.

So let’s go back to the start and see what we’ve got.

After World War 1 Arsenal were elected back to a 22-team Division 1 and Leslie Knighton was appointed manager. He was given little money to spend on players and chairman Henry Norris eventually sacked him in 1925 with Arsenal in 20th position and in grave danger of relegation.

And so to Herbert Chapman, and something worth comparing with Arsène. 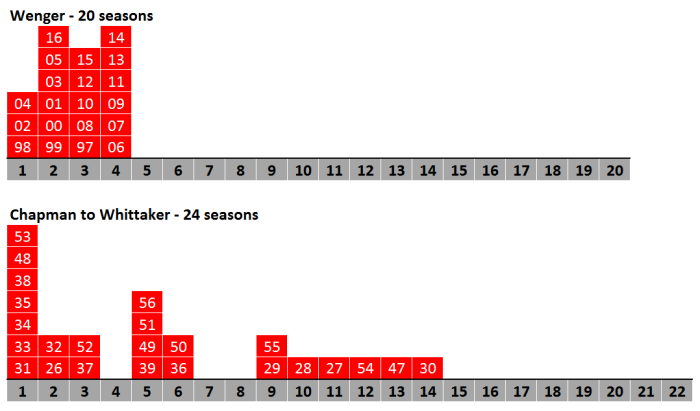 Chapman’s first two seasons included runners-up positions in both the League and FA Cup, followed by some much more average years. Then the 1930s arrived and the trophies started flooding in. The 24 seasons of Chapman and the men he worked with, George Allison and Tom Whittaker (plus the interim 5 months of Joe Shaw following Chapman’s death), yielded seven league championships – a record at that point. There were other finishes as low as 14th, but what would you rather have, seven titles and some poor seasons or three titles and lots of ‘top four trophies’?

You may say it’s slightly unfair to compare seven titles in 24 against three titles in ‘only’ 20 for Arsène. Okay, but if you arbitrarily knock off the last four years just to make them even, it’s still six titles, which is twice as many as three.

Or you could even disallow the first four years of Chapman’s reign, given he started from a much lower base than Wenger and needed time to build.

Would Arsène have done the Double in 1998 if Arsenal had been struggling against relegation just before his arrival? Probably not. Would he even have wanted the job? Who knows.

The seasons of Jack Crayston, George Swindin and Billy Wright in charge were average at best, as the Chapman influence disappeared and Arsenal struggled financially compared to the 1930s, and also struggled against the weight of history – everyone else was still desperate to beat Arsenal due to Chapman’s success in making them the biggest club in the world. For most clubs, playing Arsenal was still treated as a cup final, whatever Arsenal’s league position at the time.

Things improved under Bertie Mee, and although there were also poor times by ‘big club’ standards before Arsène arrived, let’s not forget that bar Liverpool (last promoted in 1962) and Everton (1954), every other club, big or small, spent time out of the top division between 1966 and 1996. And we still celebrated the same number of titles under Mee and Graham as under Arsène, so it wasn’t all bad by any means. It’s also true that since the 1960s Arsenal have only once gone more than eight years without a trophy, and that was in the Wenger era.

What else can we compare? How about Wenger’s successful first ten years against the 1930s?

Chapman looks the winner there. Give me five titles over three any time.

Or perhaps Arsène’s first ten against the recent ten.

Judge for yourself what story that tells. (Cue ill-informed responses about ‘financial restraints’ and the single handed building of a new stadium. I’ve refuted all that many times already.)

One final fact: Arsenal are also, I believe, the only club still in the League who have never finished outside the top 30 of the whole Football League.