I hate the word ‘Emirates’ as the name for Arsenal’s stadium. Absolutely hate it with a passion. I still can’t believe the club (well, Keith Edelman at the time) were so stupid as to not add another word into the title so we don’t have to suffer people calling it ‘The Emirates’ for the last six and next nine years. Emirates, the airline, sponsors Arsenal. ‘The Emirates’ is the country that the airline represents. It’s a small middle-eastern country, not a football stadium in North London. 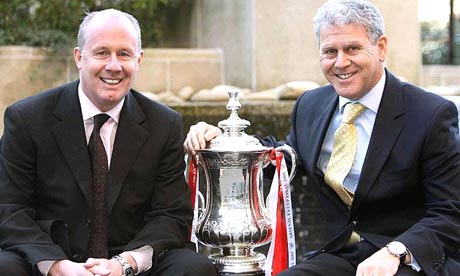 Keith Edelman, some bald guy and a silver thing (no, me neither)

The Arsenal board did much in the years from 1998 to 2006 that has proved positive for us, but they took their eye off the ball and metaphorically scuffed the shot out for a throw in when they agreed that name. Whatever the benefits of the Emirates deal, I just can’t take the stadium name seriously. To my mind all right thinking supporters should just ignore it. Even one or two BBC commentators shunned the sponsor’s name to begin with, calling it Ashburton Grove instead, but that didn’t last long.

Unfortunately what has happened is that over the last few years even the most die-hard of those against the E-word have found it slipping into their vocabulary. Many might suddenly realise in 2017 that they’ve started saying it without meaning to. Then those who adopted it all along will point out that they were right and we who prefer not to use it were the fools and Luddites. A-ha, we’ll say, what you’re overlooking my friend is that it’s only four years until this accursed deal runs out – and then what are you going to do? Suddenly start calling it something else? Will you bow down and suck on whatever Arsenal give you as a corporate sponsor? And lovers of the E-word will be struck dumb by the logic in those questions.

Acceptance of the E-word has been helped by the fact that Ashburton Grove is a bit of a crap name for a stadium too. To be honest, anything with ‘Grove’ in it sounds a bit naff, sporting-wise. But I challenge anyone to come up with a sentence containing the words ‘the Emirates’ or ‘Emirates Stadium’ that can’t be changed to say ‘Arsenal’ or ‘Arsenal’s stadium’ or ‘the new stadium’ or some other variant that makes perfect sense. Go on, give me a sentence and I’ll give you the alternative. There is no need to use the word Emirates at all.

I don’t claim that Emirates is the worst name we could have got. At least as a brand it has something of a reputation for quality, and it’s better than the Board shunning the £100 million and still choosing something daft. (The constant references to the ‘South Stand’ at Highbury never filled me with confidence that their fingers were on the pulse.) Supporters of some other clubs that have moved have to endure a lot worse than we do, and at least ours is (in theory) temporary. But then other clubs aren’t Arsenal, so expectations are consequently lower. There are probably only three clubs in England that would find their fans similarly scathing if they took a sponsor’s name: Liverpool, Newcastle and Man Utd – and I’m not even sure about Man U. Liverpool are currently planning a move, so it will be interesting to see what they end up with (but if the word Shankly isn’t in it somewhere I’ll eat my lunch). Meanwhile Mike Ashley has already had a couple of goes at renaming St James’ Park, with predictable results from fans. To be fair, trying to rename an existing stadium is bound to irritate supporters even more than coming up with a stupid name for a new one.

Those who have built new stadiums fairly recently are a mixed bag. You’ve got your ‘show me the money’ types who’ll take literally anything: Chester City for example, who have played at the Saunders Honda Stadium, the Cestrian Trading Stadium and now the Exacta Stadium, all in the last ten years; also Huddersfield at the Alfred McAlpine, Coventry at the Ricoh Arena. Then there’s the ‘local and proud of it’ type: Bolton at the Reebok, Leicester at the Walkers and Wigan at the JJB – though they’ve now moved into the next group, the ‘I paid for it so it’s mine’ egotistical chairmen: Oxford in the Kassam Stadium and Reading’s Madejski. There’s the ‘link with history’ type: Millwall at the New Den; Shrewsbury at the New Meadow (rather than the ‘New Gay Meadow’ – it’s political correctness gone mad!), the ‘community project’: Derby at Pride Park and Citeh at the City of Manchester Stadium, before Sheik Mansour hoved into view. The ‘too big for sponsors’: Sunderland at the Stadium of Light – which they claim is linked to the local glass industry and not copied from Benfica at all, oh no, ha ha. And finally the ones who had the perfect idea: take a sponsor’s money, but tack another bit on too. I give you Southampton at the (former) Friends Provident St Mary’s, and Middlesbrough at the (former) Cellnet Riverside.

Be honest, did you even remember that ‘Friends Provident’ was ever in the title of Southampton’s new ground? Everyone always called it St Mary’s, and sod the sponsor’s feelings. Southampton were actually forced into adding St Mary’s to the name by fan pressure, and they fairly soon dropped the Friends Provident bit anyway when their sponsor changed to FlyBe (who declined the option on the stadium name). As for ’Boro, they dropped the ‘Cellnet’ in 2002, but had the foresight to have asked their fans what they wanted before that, so ‘Riverside’ was already in common use. Bingo – money and credibility.

But look at us: when the Emirates deal runs out we’ll be left without a name at all. It would have been so simple to call it the ‘Emirates Arsenal Stadium’, or the ‘Emirates Highbury Stadium’ or even the ‘Emirates Chapman-Wenger Dome’ or ‘Emirates Gus Caesar Park’. Whatever, we’d have had SOMETHING to call it, and when our Arab friends left we’d have had a transition as smooth as Steve Bould’s head. Too bloody late now though.

I went to one meeting with various Arsenal commercial people, and someone from the club was asked about this. His reply was that he expected the name ‘Emirates Stadium’ to be so ingrained by 2021 that everyone would continue to use it anyway, even if the airline was no longer sponsoring it! This is completely stupid for at least two reasons: firstly, why would someone at the club be happy that some other commercial enterprise’s name is being used for Arsenal’s stadium if they’re not even paying?; and secondly, how are they going to attract another sponsor if they don’t even think people will take any notice of it? Never mind Stuart Robson, I seriously wonder why some of these commercial people are employed.

ps – just to avoid any doubt, as some people have commented, I do know who the bald guy is.

84 thoughts on “Why Did Arsenal Agree To Call It ‘Emirates Stadium’?”

Leave a Reply to Am Cancel reply