Well I wasn’t going to write anything else about Suarez, but let’s face it, what the hell else is there to write about for Arsenal fans? We may sign someone one day, but it’s August and so far we have one free transfer in and about a dozen free transfers out. Yes, all right, a small amount of money has changed hands to get rid of Denilson and get Djourou on loan, but that’s about as exciting as it gets.

Two bids for Suarez have apparently been turned down, the second one a cheeky bid of £40,000,001. I wouldn’t normally use the term ‘cheeky’ in case it were construed as an attempt to look like a loveable chirpy Cockney, but in this case it’s actually valid. You don’t get much cheekier in football than adding an odd pound on to a bid to activate a clause. Not that it seems to have done much good.

As it happened, while I was sitting around thinking whether I could be bothered to write anything at all, I came across this Times piece from April, immediately after Bitegate. 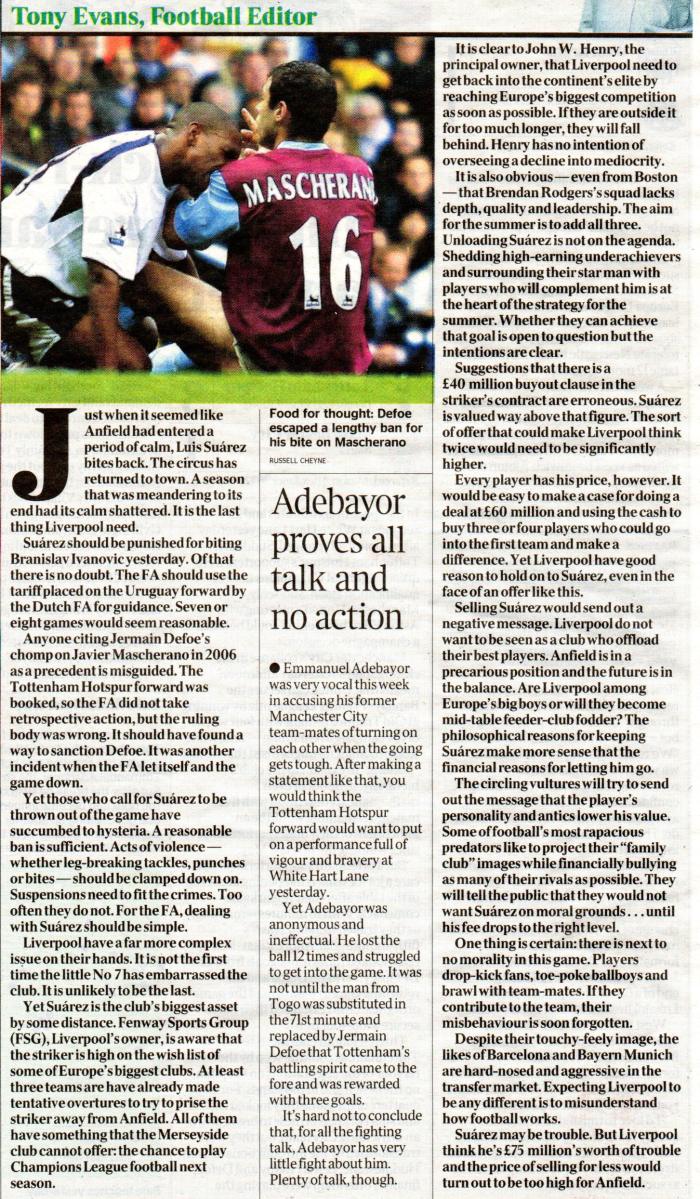 Tony Evans (who I think is a Liverpool supporter), rules out the possibility of Liverpool wanting to sell their best player despite how much trouble he is, on the basis that Liverpool need to add to their stock of quality players rather than reduce it if they’re ever going to get back in the Champions League. True enough.

He also says there is definitely no £40m buyout clause, though the fact he mentions that figure and the subsequent action on bids certainly shows that the figure means something.

He finishes by saying Liverpool should value the bitey one at £75m. If that’s the case I can tell you now Arsene is never going anywhere near that figure. And rightly so.

By way of light relief, here’s another piece from Giles Smith in The Times, from way back in January, when QPR and ‘Arry were still in the Premier League – you remember those days. What fun they were.