This is a rather belated review of John Cross’s biography of Arsène Wenger, entitled “Arsène Wenger: The Inside Story of Arsenal Under Wenger”. The book has been out since last year, but I’ve only recently got round to reading it. It’s probably a bit late for a review, but I felt like writing this as it might change a few people’s opinions of the author.

John Cross, as most Arsenal fans will know, is a football reporter for the Daily Mirror, specialising in reporting on Arsenal. He’s a lifelong Arsenal supporter who began his journalistic career at the club’s local paper, the Islington Gazette. However, he is far from universally popular among Arsenal fans, for several reasons.

Firstly, leaving aside anything else, there is hardly any Arsenal fan these days – I certainly can’t think of one – who would be universally popular with his fellows, often for reasons to do with the subject of the book, Mr A Wenger.

Secondly he’s a journalist, so there is a section of the public who immediately see him as a peddler of unfounded rumours, only interested in attracting clicks to his employer’s website or attracting people to buy the hardcopy of the paper he works for. And while he does some of that, there are also still many people who don’t seem to understand that a report that a club is interested in a certain player is not automatically a lie just because the transfer does not eventually take place. 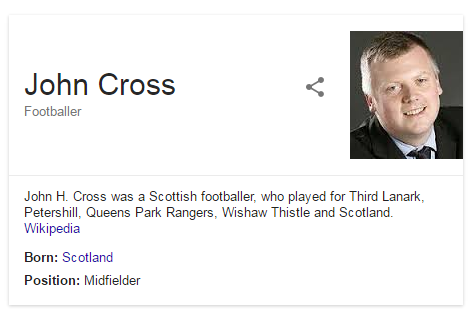 John Cross: Er, are you sure about this bio, Google?

Thirdly, for reasons of superstition Cross often appears to back the opposition against Arsenal, which is far too subtle a position for many to understand.

Fourthly, he does occasionally seem to jump on Arsenal-related stories and try and make something out of them when really they would be far better left alone. The infamous bin-bag protest that never was and the recent primary school level of analysis done on Arsenal’s accounts by investment house CSS are two examples, and I certainly can’t defend him on either of those.

I do think he gets a bad press sometimes, though, and is often unfairly maligned. Cross is broadly supportive of Arsène Wenger, so those who are against the manager automatically accuse him of sucking up to Arsène. If you follow him on twitter you’ll have seen he gets a lot of stick for backing Wenger (among other things), but twitter is not great for nuance. Its 140 characters don’t give much scope for full explanations and pros and cons, so there’s no point getting too upset if some people don’t understand your message – particularly if they’ve already made up their mind they don’t like you.

With all that in mind you could be forgiven for thinking that a biography of Arsène Wenger written by John Cross would dwell a lot more on the positives of the man than the negatives. Even I thought that, so I was quite surprised by what I read. There is praise of course, and mostly quite deserved, for Arsène has achieved many great things at Arsenal. But there is at least an equal amount of criticism.

The book is a roughly chronological journey through the years from 1996 to 2014, so naturally most of the success and the praise is in the first half. I am old enough to remember many years of football before Arsène arrived in England, so I’d watched Arsenal teams play in a variety of styles under several managers with varying levels of success. But I had never seen anything like the scintillating football produced by Arsenal in the first six years under Arsène. It was phenomenal. It was better than anything any other English club had ever produced (or has got close to since), comparable to Pele’s Brazil and Cruyff’s Holland. We were spoiled by that, and it may never be repeated. Nevertheless, by the time I got to about page 100 of Cross’s book I was getting a little bored of being reminded how great Arsène was and that he couldn’t put a foot wrong. He WAS great, no doubt about it, but there are only so many times you can have it pointed out without thinking, okay, let’s move on now. I started asking myself if I was bothered about reading the rest, but I don’t like to give up on books, so I persevered. Then things changed.

It turns out that John Cross, although clearly a big fan of Arsène, can see the man’s faults. He has spent many years in press conferences with the Arsenal manager and is wiser than you might think, as well as less forgiving, about Wenger’s exaggerations, misdirection, mood swings, petulance and on occasion downright lies. He’s prepared to call Arsène out on all these things. Then there’s the lack of tactical nous, the “shambolic and chaotic nature of their transfer business” and his losses of temper on the touchline that have resulted in shoving matches with other managers.

Cross also points out that funds have not been as constrained as Arsène likes to claim, and by the time they moved into their new stadium there was more money available than there would have been at Highbury. He also notes Arsenal have spent huge sums on wages, which would not have been possible had they stayed at Highbury. Unfortunately a procession of former-players are trotted out to give opinions on the finances when they know nothing about them, but as this book is strictly post-1996 at least we’re spared Tony Adams’ assertion that Danny Fiszman put millions of his own money in to buy Bergkamp and Platt.

Nick Harris of Sporting Intelligence is quoted to say that what changed was not Arsenal having less money, but Chelsea and Man City having more – which is entirely true, despite Wenger’s attempts to rewrite history on this point. Arsène’s transfer dithering and reluctance to spend a pound more than he thinks a player is worth – even when everyone (including him) is as sure as they can be that the player would be a useful addition – are also criticised by Cross.

The book is not perfect. In parts it contradicts itself, and not just in the choice of quotes from ex-players with differing views on training methods, managerial styles and why Arsène behaves as he does. Arsenal’s new stadium cost £350m on page 138, but this had gone up to £390m by page 157. It should have got to the true price of £420m by about page 171, but I missed that. On page 186 the sale of Van Persie to Man Utd was “pure and simple a financial decision”, but by page 197 it was only “a financial decision as much as a football one.” And did you know David Dein joined the Board in 2003? Me neither.

Those niggles aside, I found it to be a very balanced telling of the story. If Arsène himself has read it then I suspect he won’t have liked quite a lot of it, and that’s probably a good test for any biography.